The NFL DFS week 11 main slate on DraftKings is slightly different this week in the sense that there are no standout matchups with high implied totals. The Packers and Colts are the highest with a total set at a measly 51. To give some context to that number, the Sunday night game between the Chiefs and Raiders is currently at 57. However, it’s not all gloom and doom. I think this offers us an opportunity to focus on lineups and stacks from lower-owned games.

These are my personal opinions on the games and strategies at the time of writing this. I may employ different players and strategies than above if later or further information makes me re-evaluate my opinions. 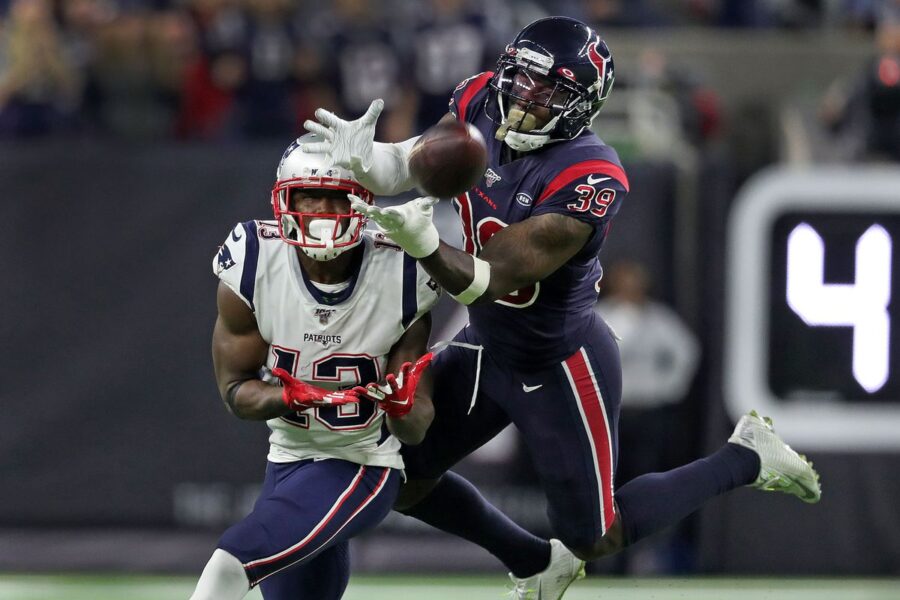 This is my favourite game to stack and mini-stack as currently, both teams have players in very consistent and clearly defined roles. This hasn’t always been the case with the Patriots and if there’s one fly in the ointment, it’s that they might have some players back from injured reserve this week. However, I think this will put people off playing them which we can take advantage of.

Cam Newton ($6.2k) has four rushing touchdowns in the last three weeks but only a single passing TD. The Texans give up the 3rd most DK points to running backs and with the number of designed runs for Cam, he should be able to take advantage of this. Houston has also given up the most runs of 10 yards or more. RB Damien Harris ($5.7k) has been given bellcow usage in the past three weeks. He’s not involved in the passing game but he will surely be able to feast on first and second down against this weak run defense.

The very limited Patriots passing game has been going through Jakobi Meyers in recent weeks and he’s only $4.9k. In the past two weeks, he’s averaged a staggering 46% of the targets. There’s a small possibility that Julian Edelman ($4.3k) will be back this week but even if Meyers targets reduce because of that, he’ll still have plenty of opportunities.

For Houston, we need to ignore last weeks’ performance in a very windy Cleveland. Before that Deshaun Watson ($6.5k) had gone 4 straight weeks with at least 24 fpts. Historically DFSers are reluctant to pick players against the Patriots defense but this isn’t the Patriots defense of yesteryear. Duke Johnson ($5.4k) has the backfield to himself now and played 95% of the snaps last week. Like many, he had a disappointing week but he has a chance to bounce back against a middle-of-the-pack New England run defense.

We all know that Watson primarily targets Will Fuller ($6.2k) and Brandin Cooks ($5.2k). It’s a very concentrated target tree and in the last three weeks, Cooks has out-targeted Fuller but is still $1k cheaper.

My favourite stack from this game is Watson and Cooks from Houston with Harris of the Pats on the other side. 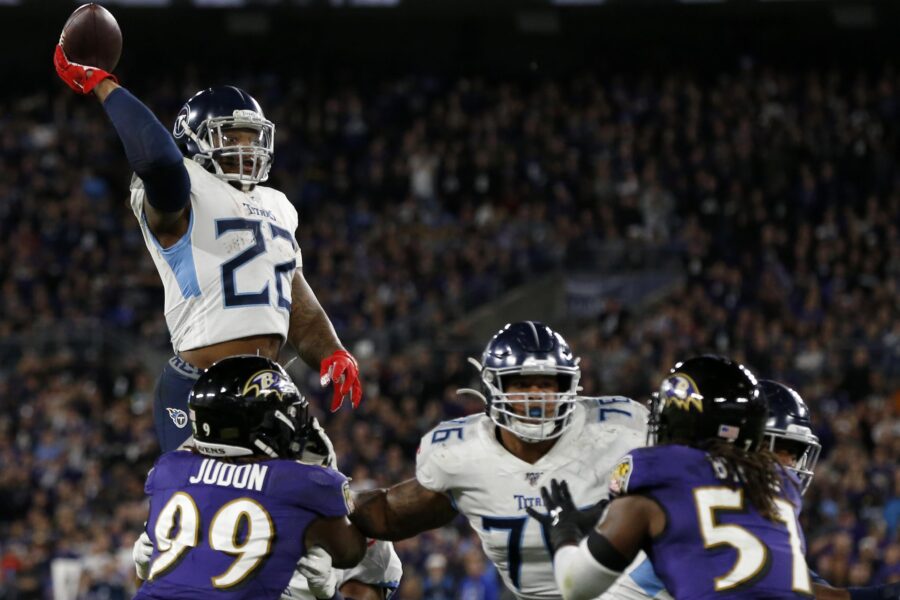 It’s unorthodox to play stacks against the Ravens D but it feels like one of those weeks where it’s worth taking that sort of risk.

Ryan Tannehill has disappointed the last few weeks after a great start to the season. I don’t think this is the week he reverses that as I suspect the Titans are going to rely on their much-vaunted running game and Derrick Henry ($8k). Henry is in his own pricing tier this week and I suspect that combined with facing the Ravens will make him low-owned. Henry is matchup and game-script proof and is one of the players most likely to hit a long touchdown run or score multiple TDs. Also, Baltimore will be without DT Brandon Williams who is very important to their run defense.

The Tennessee pass-catchers will have their work cut out for them this week. I prefer Corey Davis ($4.8k) over AJ Brown ($7.2k) because of his price but I’m not that interested in either of them.

Lamar Jackson ($7.3k) has had a disappointing season so far from a fantasy point-of-view. However, the talent is still there and he can still score over 30 fpts in a game as he did in week 6 at the Eagles. The Titans give up the 8th most fantasy points to RBs and with Jackson running the ball on average 13 times in each of the past three games, I expect a good game from him on the ground. Also, the Titans are awful against the pass so there’s a lot to like about this matchup for Lamar. The backfield is a bit of a mess in terms of touches and you’d be guessing who’s the play week-to-week. I’m avoiding it whilst the current committee is in place.

Marquise Brown ($5.8k) and Mark Andrews ($4.9k) have a chance to smash in their matchup against the second-worst Titans pass defense. Brown is in a real slump but if things are going to change, it will be this week. With Nick Boyle injured, Andrews is expected to get even more looks going forward. He’s another player who’s been in a slump but showed some signs of life last week with 13 fpts. Whilst these players have been struggling, Willie Snead ($4.5k) has quietly had a very good past three weeks.

There are definitely opportunities in this game and my favourite stack is Jackson and Andrews with Henry running it back for the Titans. 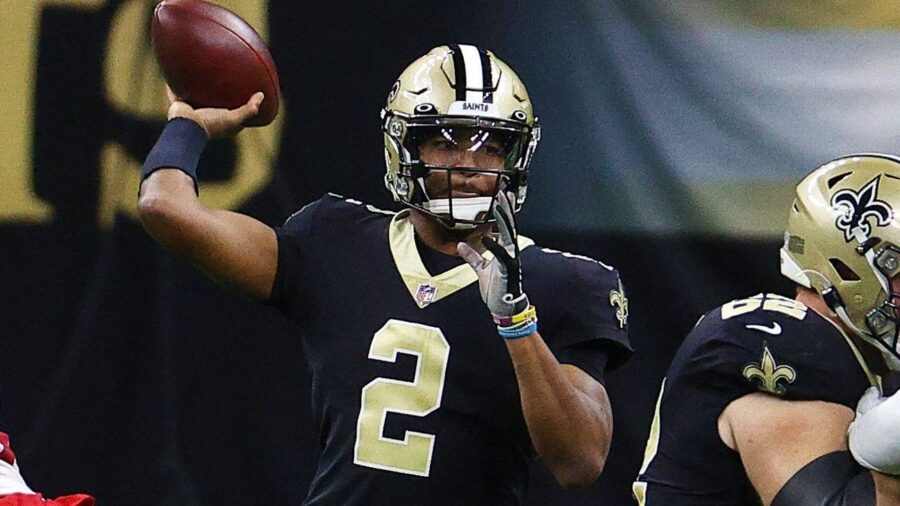 I expect this to be a popular game and should garner a lot of ownership.

Matt Ryan ($6.3k) is consistent when it comes to fantasy scoring. He’s coming up against a Saints defense who is very good against the run so may be forced to pass more than usual. Todd Gurley has averaged over 20 touches in each of his past four games. However, he’s not really converting that into big fantasy scores so he’s not an option for me against this very good run defense.

Julio Jones ($7.5k) has largely disappointed but showed in week 6 that he still can score over 30 fpts in a game. He benefits when Calvin Ridley ($7k) is on the field and he looks like he could be back on Sunday after missing week 9. I expect Atlanta to have a pass-heavy gameplan so both players should have the chance of double-digit targets. If you need salary savings, Russell Gage at $3.9k is in play. Although he’s performed poorly after a blistering start to the season, there might be extra targets his way this week. Olamide Zaccheaus had a big week 9 but that was partly due to Ridley being out. If Ridley is back, he might revert to his bit-part role.

The biggest weakness of the Saints D in terms of fantasy scoring is to tight ends. Haydn Hurst at only $4.4k with 22 targets over the past three weeks looks like a smash play this week.

With the Drew Brees injury, we are expecting Jameis Winston ($5.9k) to be the starter. However, Sean Payton wouldn’t name a starter earlier in the week so Taysom Hill ($4.8k) is in contention. Jameis is as likely to throw an interception as a completed pass. With the likelihood of a pick-six, this is one of those rare weeks when you can play the opposing defense of players in your lineup. The Falcons D is only $2.3k this week!

Alvin Kamara ($9.2k) continues to be the focal point of this offense and is always capable of a ceiling game. He’s playing more like a receiver than a running back and the Falcons are one of the worst defenses against the pass. Kamara is the most expensive active RB on the slate but still offers great value.

What’s happened to Michael Thomas ($7.3k)?!? He’s not been his old self since coming back from injury and only offers uncertainty at this price. If Winston starts at QB, we can expect more downfield passing which might favour Deonte Harris ($3.2k) and Marquez Callaway ($3k). Both have flashed signs of life this season but very fleetingly so playing either would be a punt. Tre’Quan Smith ($3.5k) is probably out due to the concussion he suffered last week. Jared Cook ($4.1k) might be another player to benefit from the change of QB. The Falcons give up the most fantasy points to TEs in the league.

If you’re going to play this game, you need to stack many elements of it to differentiate yourself from the opposition. I like a Ryan, Jones, Hurst stack brought back with Alvin Kamara of the Saints. If you want to really commit to this game, you could also add the Falcons D.

Mark is an experienced DFS player and a member of the UK’s winning Fantasy Ashes team. A jack of all sports but NFL is his first love. You can find him on Twitter @_SMRF

2020-11-21
Previous Post: Alex Barbir: A Fairy Tale Hero In Waiting
Next Post: Is Zach Wilson Destined For The First Round?

END_OF_DOCUMENT_TOKEN_TO_BE_REPLACED
Get 20% off PFF ELITE and prepare to win in 2019!