2018 may not have gone the way Jets fans wanted. Last in the AFC East and their head coach Todd Bowles paid the price. But the season had one major positive. The Jets do believe they have their franchise QB going forward. Given the performances Darnold gave over the final month of the season the belief doesn’t seem misplaced.

The Jets are still chasing the Patriots but they at least have that major piece to hang their hat on.

Before we get into the off season here is a quick dictionary definition;

a television or radio drama serial dealing typically with daily events in the lives of the same group of characters.

Where to start with the Jets? Probably easier to bullet point it….

And I think I probably missed out about 10 other crazy things. This team is always battling to be relevant, and part of the news cycle in NYC, but I think this is the wrong way to go about it. 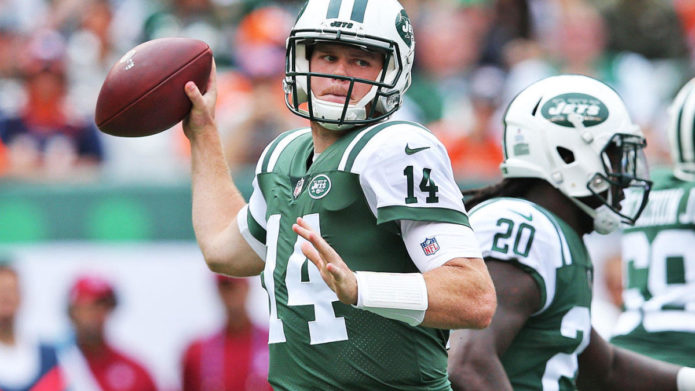 Regardless of the turmoil, the reason the Jets hired Gase was for him to get the best out of Sam Darnold. Darnold showed flashes of being the franchise QB the Jets crave. It is for him and Gase to add to this reputation this season. Regardless of what Gase may think of the salary the Jets have paid Bell. I expect him to be the focal point of the offense. To take the strain off Darnold, and be back to being a top 5 RB in the league. The addition of experienced linemen in Kelechi Osemele and Ryan Kalil on the interior should add to Darnold’s progression.  There are promising signs for the Jets on Offense if all the pieces click.

I think there is one thing we know for sure about the Jets defense this season, it won’t be boring. Gregg Williams is best described as fiery. He has been a successful DC in the NFL and the Jets do have talent on defense. With the likes of Jamal Adams and the wall of Williams (Leonard and Quinnen.) I expect the Jets to be much better on defense this year (26th in 2018.) If papa WIlliams (Gregg) can up the aggression in the play calling the interior pass rush could be dominant.

Each of the Patriots’ divisional rivals drafted interior pressure in the top half of the first round to get after Brady. The Jets grabbed the best one. Surely avocado ice cream and Scarnecchia can only help so much?

The Jets’ season will be defined for me on how Gase and Darnold mesh. We know Gase was great with the Broncos, but he had a HoF QB with him. After the failure in Miami he needs to rebuild his reputation as a QB whisperer. That needs to begin right away or he could be out the door. The defense has a chance to be good, but I am concerned that the offense won’t keep up.

Paul is most famous (infamous?) as Mainz one half of Waxing Lyrical. alongside his Partner in Crime Neil “Dutts” Dutton.

END_OF_DOCUMENT_TOKEN_TO_BE_REPLACED
Get 20% off PFF ELITE and prepare to win in 2019!