A season after being brought down to Earth with a thud by a defensive masterclass from the Patriots, the Rams were unable to come close to attaining the heights of their previous campaign. Primarily driven by the steep decline in performance of their offensive line, plus opposition teams being armed with the Patriots’ Super Bowl game-plan (amongst other good attempts from 2018), the Rams offense fell from second in the NFL to 17th in DVOA. The rushing offense, a crucial part of their offensive puzzle fell from firstin the NFL to 20th. Meanwhile, Jared Goff and the passing offense were unable to pick up the slack, although the decline from that aspect of the offense was considerably less precipitous. Todd Gurley’s offseason departure signalled the end of the first iteration of McVay’s Rams offense.

On the defensive side of the ball, the Rams continued to benefit from having Hall-of-Famer-in-waiting Aaron Donald wreaking havoc on the defensive line, whilst Jalen Ramsey was brought in during the campaign, offering superstar quality on the back end. Cory Littleton and Dante Fowler also impressed and the Rams’ defense improved on their 2018 efforts to be a top 10 NFL defense.

Despite this, their offensive decline played a major role in their missing of the playoffs in 2019, alongside the resurgence of the 49ers and the Seahawks’ tiresome-but-impressive longevity as a high calibre outfit. A 3-3 division record was a major change after a 6-0 division record in 2018, whilst defeats to Tampa Bay and Pittsburgh proved particularly costly.

The Rams’ aggressive approach to player acquisitions in light of their Super Bowl window opening may have come back to hurt them this season. With their Super Bowl window now appearing disconcertingly narrow, the Rams had limited draft and financial capital to add genuine high calibre talent to a roster that saw several big name players depart. Of course, the mid-season trade for Jalen Ramsey represented a major aspect of their 2020 recruitment drive, as the team seeks to reload and re-establish themselves as a Super Bowl contender. Nevertheless, with draft capital particularly lacking, the Rams used free agency to plug two of their most significant new holes.

The team replaced outgoing defensive tackle Michael Brockers with former Lions DT A’Shawn Robinson, before Brockers also returned to the organisation giving the Rams a pair of stout interior linemen to pair with the incomparable Donald. Despite the benefits the trio may bring, the team may well be somewhat frustrated about the capital being used on the interior DL given other holes on the defense.

Leonard Floyd replaced the departing Dante Fowler. Floyd and the Rams will hope that he enjoys a pass rushing productivity renaissance similar to that enjoyed by Fowler, who certainly benefited from Donald’s presence on the defensive line. Even so, Floyd has not shown the quality as a rusher that Fowler demonstrated even before his own arrival on the West coast. That Floyd is their biggest addition speaks to the Rams’ recruitment issues.

Otherwise, the blue and yellow side of LA… errrr… never mind; the Rams, attempted to plug other holes through the draft. Notable acquisitions include wide receiver Van Jefferson, drafted with the selection that was gained from trading the stylistically different Brandin Cooks to the Texans, and the two Terrells: safety Terrell Burgess and EDGE Terrell Lewis. 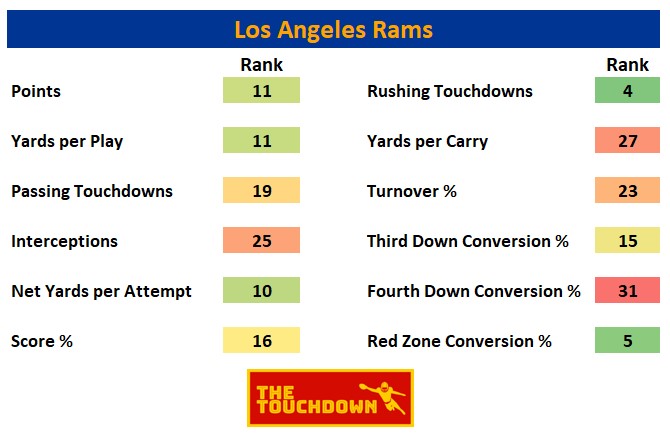 Jared Goff enters his fifth season in the NFL having yet to truly demonstrate his franchise quarterbacking credentials, despite his Super Bowl appearance. It is arguable that whilst Goff made financial sense as a quarterback on his rookie deal, he looks worryingly like a player for whom paying franchise quarterback money hinders his team.

In 2019, as the Rams run game fell away, more responsibility was placed on Goff’s shoulders. He shared the league lead for targets at 626 with Jameis Winston, however he was not able to rise to the challenge of carrying the offense. Goff was only capable of achieving the 28th best touchdown rate out of 32 qualifying quarterbacks in the NFL yet suffered from the 9th highest interception rate in the NFL. His performance under pressure was also poor and demonstrates little sign of improving moving forwards. It seems likely that Goff will need the return of the more effective offensive line along with the Rams’ effective rushing attack to restore the Rams’ offense to their past glories.

The Rams will be hoping another year of development for some of the more youthful individuals on their offensive line results in more consistency up front. Although Andrew Whitworth provides a quality veteran presence on Jared Goff’s blindside, the other four positions on the offensive line will need substantial improvement.  Austin Blythe and Rob Havenstein will be hoping to return to their 2018 form, whilst third-year pros Austin Corbett and Joseph Noteboom will both need to demonstrate substantial improvement as run blockers if the Rams’ run game is to return to relevance.

The backfield trio of exciting rookie Cam Akers (who created a lot of his own yardage at FSU), Malcolm Brown and potentially explosive second-year pro Darrell Henderson will be hoping to benefit from any offensive line improvement. With no Todd Gurley, the door is open for all three backs to stake their claim to serious snaps. 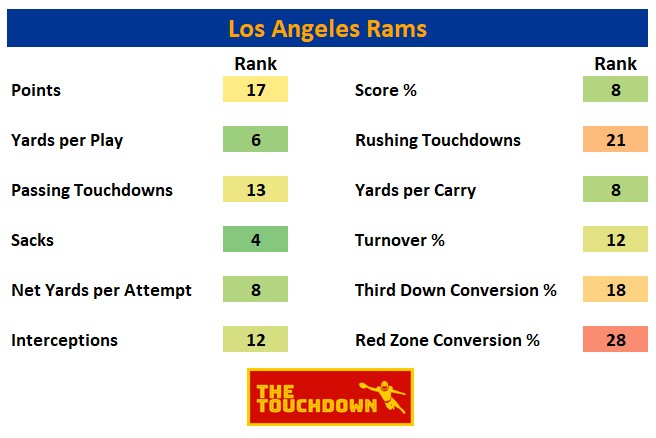 Any defense featuring Aaron Donald and Jalen Ramsey should be good. Donald is indisputably the best defensive player in football whilst Ramsey, as potentially the league’s best cornerback, joins Donald in discussions as to which defensive player is the NFL’s most valuable.

Around their two superstars is where questions emerge. Donald should have adequate support inside but what about at EDGE rusher? Can Leonard Floyd replace Dante Fowler? Or will the likes of Samson Ekubam, Ogbonnia Okoronkwo, Terrell Lewis or Jachai Polite be attempting to pick up the slack? The Rams have a number of options with little evidence that any will be the answer.

At linebacker, the departure of Cory Littleton leaves a gaping hole at the second level, especially in coverage. Micah Kiser, Travin Howard, Troy Reeder and Kenny Young are competing to fill the two “starting” MLB spots; between them they have just 881 NFL snaps, fewer than a full season.

The Rams could plug that gap with safeties, but the Rams did lose Eric Weddle (who primarily played as a deep safety) in the offseason. Taylor Rapp can build on a solid rookie season where he was particularly effective in the box, which could see him becoming a centre-piece of their intermediate coverage. John Johnson meanwhile, could be asked to play more at free safety than he ever has previously. Will that enable a return to form? Rookie safeties Terrell Burgess and Jordan Fuller could push for dime-backer snaps.

At cornerback, Troy Hill is a talented option opposite Ramsey. Inside, replacing the aptly named Nickell Robey-Coleman will be a challenge however.

Overall, it seems the Rams’ defense could have significant vulnerability in the middle of the field, which could be a problem given their divisional opponents.

More important pieces have departed and the Rams’ ability to reload has been depleted by short-lived trade acquisitions and the salary cap squeeze. With the NFC West an incredibly competitive division and a potentially challenging slate of out-of division match-ups, the Rams could well find themselves once again out of the playoffs.

Their first 3 games will be a litmus test for their campaign. Emerge from them having performed well on the field, and they will have signalled their capabilities to return to the playoffs. Struggle and their first season at the incredible SoFi Stadium could be a disappointment.

END_OF_DOCUMENT_TOKEN_TO_BE_REPLACED
Get 20% off PFF ELITE and prepare to win in 2019!