The Indianapolis Colts were dealt a hammer blow before the season had even started in 2019, losing Andrew Luck to retirement in August. His well-documented struggles with injury caused him to retire prematurely, aged just 29. Indianapolis lost their talisman and one of the game’s best quarterbacks in a shock turn of events. It would significantly hamper their progress in 2020.

The Colts had traded out of the first round in the 2019 draft, and focussed their selections on the defensive side of the ball. Stop gaps Brian Hoyer and Jacoby Brissett did what they could under centre, but the team struggled without their leader. To add to their woes, the Colts’ injury list last year was staggering. However, given the circumstances picking up seven wins along the way demonstrated signs of a franchise with potential entering 2020.

An argument can be made that the Colts are the most improved team in the off-season. The most eye-catching decision was the trade to bring DeForest Buckner to Indianapolis. In bringing him from San Francisco, the Colts surrendered their first round draft pick. However, Buckner should immediately improve an already tough tackling run defense.

Signing 38 year old free agent quarterback Philip Rivers suggests that the Colts are ready to make a run for the playoffs imminently. Rivers took the gunslinger’s approach in 2019, throwing for an impressive 4,600 yards. However, this came at a cost. Rivers’ passing touchdowns fell (from 32 to 23) and his interceptions rose (from 12 to 20). There are concerns that Rivers lacks the arm strength as his career comes to an end.

One significant signing in the off-season was that of a familiar face. Extending left tackle Anthony Castonzo ensures consistency in what was a top-10 offensive line group in 2019. 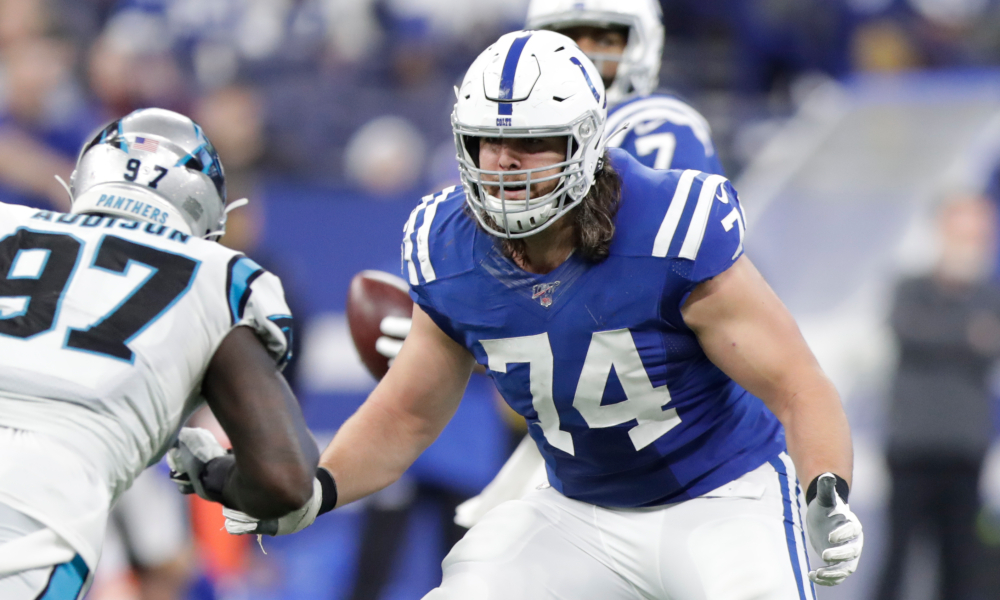 The offensive line is a quarterback’s dream, and should be the best that Philip Rivers has played behind in his career. It certainly ranks in the top-10 lines in the NFL today. Left guard Quentin Nelson is arguably the best at his position right now, having received two All-Pro First-Team in his first two years in the NFL. The line as a whole has strength in both areas, but they ranked higher according to Football Outsiders when it came to their pass blocking (Seventh). Rivers was sacked 34 times last year. At the ripe age of 38, he’ll be hoping for less punishment in Indy.

That is not to say they are not a good run blocking line, ranking seventh in power success, fourth in second level yards and 10th in open field rank. However, their 20% stuffed rate, which is when a back is tackled at or behind the line of scrimmage, ranked 22nd, making them a somewhat all or nothing unit in the run game at times.

Behind Rivers, Jacob Eason was taken in the fourth round of the 2020 NFL draft, and may be a long-term project. For now, Jacoby Brissett provides one of the best backup quarterbacks in the league, having been their starter in 2019.

The team should improve in both the running and passing game from 2019. Jonathan Taylor joins a backfield that was dominated by Marlon Mack, who had 247 carries last year. Taylor offers power in the running game, which compliments the elusive styles of Mack and Nyheim Hines.

T.Y. Hilton, when healthy, is the team’s undisputed WR1. Zach Pascal led the side in receiving yards in 2019 with just 607, ranking 64th in the NFL. This sorely needs to improve if the Colts want to be a play-off team next year. Michael Pittman Jr, the Colts second round pick in the draft, adds a physical presence out wide, and they will be hoping last years second-round pick Parris Campbell can take the next step in 2020.

For Rivers to bounce back from a disappointing 2019, he’ll need help from his receivers, and that is no sure thing right now. However, tight end Jack Doyle could offer a reliable pair of hands over the middle. Frank Reich knows that his side is desperately close to being a challenger in the AFC, but it’ll take a big improvement in the passing game to get there.

The Colts were an average defensive unit in 2019, ranking 18th in the league. They gave up over 1500 yards in the passing game, compared with little over 1000 in rushing.

The trade to bring DeForest Buckner to Indianapolis will certainly improve the defensive front. Buckner and Darius Leonard will form a fearsome partnership in the AFC South. They had 12.5 sacks between them last year, albeit on different teams. Bobby Okereke had a promising rookie year at linebacker, and will hope to build on a solid start to his career.

The key weakness in this side is the secondary. Losing cornerback Pierre Desir to the New York Jets in free agency is a minor setback. Replacing Desir with former All-Pro Xavier Rhodes should give the secondary a much-needed upgrade. The success of their passing unit will depend on their front-seven finding ways to put opposing quarterbacks under pressure quickly and often.

The Colts are set to be one of the most improved teams in the NFL next year. They have a short term solution to last year’s quarterback woes. A lot hinges on the performances of Rivers in 2020. Behind a fearsome offensive line and with a WR group loaded with potential, he can put his disappointing year in 2019 behind him. Taylor should be a plug and play rookie, and alongside Mack can provide the two-headed rushing attack similar to the one Rivers enjoyed in LA.

One thing that Rivers’ supporting cast cannot do is allay fears surrounding his arm strength and accuracy. Simply put, he threw too many interceptions in 2019. If he can cut those out, his career may end on a high in Indianapolis.

TOM WATCHED HIS FIRST EVER NFL GAME AT AN EX’S HOME IN NORTH CAROLINA IN 2013 AND “ENCOURAGED” TO SUPPORT THE INDIANAPOLIS COLTS. ONE BREAK-UP AND FOUR YEARS LATER, HE SWITCHED ALLEGIANCE TO THE JETS AND HAS BEEN OBSESSED WITH THE GAME EVER SINCE. TOM CAN BE FOUND ON TWITTER AT @DOWNTHEMANNYRD

END_OF_DOCUMENT_TOKEN_TO_BE_REPLACED
Get 20% off PFF ELITE and prepare to win in 2019!