Week 6 brings us a blockbuster in Kansas City. Let's break down the stats to preview what might happen

After an afternoon of NFL football at the Tottenham Hotspur Stadium, NFL fans will be treated to a feast in the Sky Sports 6 pm kickoff. The 3-2 Houston Texans travel to the 4-1 Kansas City Chiefs in a battle of the potential AFC contenders. With two of the most exciting quarterbacks in the league on show in this one, what can we expect to see?

This season we here at the touchdown want to help you understand more about what you can expect or are seeing if you choose to watch the full game on Sky as opposed to Red Zone. You can check out the superb piece by Tyler Arthur about how to see what the QB is seeing from your couch here. Each week I will be taking a look at the stats from this season and last, and helping you understand what to expect on Sunday.

Using these numbers, we will try and get a feel for how the teams might attack each other. What elements will be crucial in deciding the outcome, and what might be a bluff? Additionally, each week we will look at those all-important third down and Red Zone numbers. Along with turnovers they are the most crucial statistics in the game of football. Prolong drives and score touchdowns when you get inside the 20 and you stand a good chance of winning. Settle for punting and kicking field goals and you are fighting an uphill battle.

Let’s take a look at our Week 6 6 pm contest as the Houston Texans take on the Kansas City Chiefs in Kansas City.

THE BATTLE OF THE YOUNG SUPERSTARS 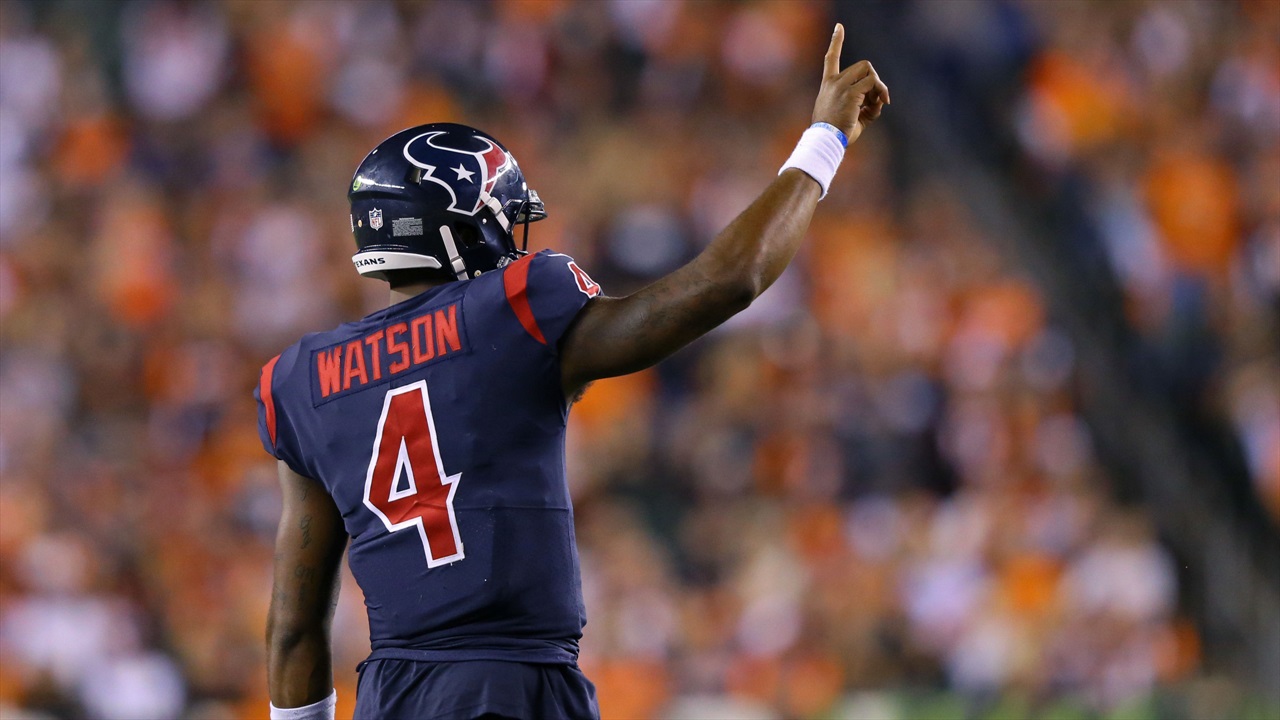 We normally start this article by looking at the matchups, but the story everyone has been talking about this week is the battle between Deshaun Watson and Patrick Mahomes. It is somewhat a phony war as they will never actually be on the field at the same time unless something very weird happens. However, the quarterback who gets the most of their weapons will likely lead their team to victory.

In terms of their performance this season, their a lot of similarities. They are tied in second place for passing touchdowns with 11, both in the top-six in the league when it comes to their average depth of target (aDOT), and among the top-four QBs in the league in yards per scramble.

Another interesting comparison is that Mahomes has actually been hit more time while throwing than Watson. Mahomes has been hit 17 times to Watson’s 15, however, Watson has been sacked 10.2% of the time to Mahomes 3.5%. That contrast in protection could be the difference in this game. With two talented QBs going toe-to-toe this game likely comes down to one defensive play. With the Texans offensive line struggles, there is a far greater chance it is the Chiefs defense which makes the play that separates these two teams.

CAN THE TEXANS EXPLOIT THE CHIEFS RUN DEFENSE?

The Chiefs run defense has been really bad this season, ranking 31st in yards per attempt, with 5.3. They have allowed over 150 yards on the ground in each of the last three weeks, as well as four straight over 100 yards. After the Colts used the ground game to try and starve the Chiefs of the ball in Week 5, will the Texans look to do something similar in Week 6?

The problem for the Texans is that their run game has been fine, but nothing to be excited about. Overall, they rank eighth in rush yards per attempt and have five touchdowns on the ground, three of which belong to Watson. Carlos Hyde is averaging 4.2 yards per carry, with Duke Johnson an impressive 6.4. In fact, Johnson is interesting, because he is also third in attempts per broken tackle, and second in yards after contact per attempt. Could this be a game we see Johnson plant his flag as the lead back in Houston?

The instinct for the Texans will be to fight fire with fire. They rank sixth in the league in net passing yards per attempt, and fourth in passing touchdowns. However, the Chiefs defense has been respectable against the pass this season, ranking just above the league average in most categories. Additionally, a heavy passing game will offer more opportunities to the Chiefs offense to try and get going. The Texans’ offense is good, but there is little doubt in my mind the Chiefs’ is better. The best way to beat the Chiefs is to starve them of attempts, and an effective run game can help you do that.

WILL THE CHIEFS OFFENSE GET BACK ON TRACK?

It was an ugly game for the Chiefs on offense last week. Lacking their two best receivers and with Mahomes hobbled would never be easy. This week should be a different story though. Mahomes has been practicing in full this week and Tyreek Hill may be back as well. The Chiefs rank second in the league in net passing yards per attempt, as well as joint-fourth in passing touchdowns.

Last week was their lowest output of the year through the air. Mahomes and the passing game could only muster 288 yards of offense, and the run game did not come to their rescue. In fairness to Mahomes, with the collection of receivers he had, 288 yards is impressive. However, for an offense which averages over 350 yards passing this season, last week was disappointing. The bad news is that Sammy Watkins will likely be out, or limited at best. That means Byron Pringle, Mecole Hardman, and Demarcus Robinson will need to step up again.

The running game is a major concern. Damien Williams average 1.8 yards per attempt and LeSean McCoy has been far more effective with 5.4 yards per carry. The backs have been useful in the passing game, but the Chiefs will be desperate to get more out of them on the ground in this one. The Texans rank 15th in rushing yards per attempt, and third in rushing touchdowns, so this may be another tough week for the Chiefs ground game.

THIRD DOWN AND RED ZONE

This Week 6 showdown should be a fascinating contest, and how these teams do on third down and in the Red Zone could be the difference-maker.

The Chiefs offense leads the league in yards per drive, with 43.6 and ranks fourth in plays per drive, with 6.39. Their superb success on third down is a big reason for that, as they rank third in conversion rate. Heading into Week 6 the Chiefs are converting on 48.7% of their third-down attempts.

However, the Texans can actually beat the Chiefs there. The Texans offense converts on over 53% of their third-down attempts. Despite that, the Texans rank just 13th in plays per drive, and fifth in yards per drive. Both defenses rank in the bottom half of the league in third-down defense, so we could see plenty of extended drives in this one.

Both of these teams rank in the top-five in points per drive as well. The Chiefs are second with 2.78 points per drive, and the Texans are fourth with 2.40 points per drive. However, their red-zone conversion rate makes for interesting reading. The Texans rank second in the league, scoring a touchdown on 73.6% of red-zone attempts. Meanwhile, the Chiefs score a touchdown on just 50% of their red-zone attempts, which ranks them 21st. The Chiefs have the talent to get away with that poor conversion rate against other teams, but this Texans offense is one that can make them pay if they do not take their chances near the goal line.

BEN IS THE HEAD OF NFL CONTENT FOR THE TOUCHDOWN. YOU CAN ALSO FIND HIS WORK AT; FFSTATISTICS, PRO FOOTBALL NETWORK & ROTOBALLER. FOLLOW BEN @BENROLFE15 ON TWITTER.

END_OF_DOCUMENT_TOKEN_TO_BE_REPLACED
Get 20% off PFF ELITE and prepare to win in 2019!