Think the 2004 NFL Draft was all about the quarterbacks? Think again. Whilst you were all enjoying a circus involving Manning and Rivers the University of Miami were quietly taking over the entire first round… 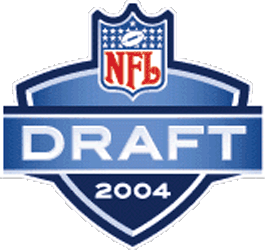 If Mel Kiper Jnr’s latest mock draft is to be believed, the University of Alabama will set a new record for the most first rounder’s drafted in an NFL Draft since its inception. And for an Alabama fan like me that would be a very proud moment indeed – and one, dare I say it that Nick Saban might say is the pinnacle of his career.

But okay, if this is a new record, who holds the old record…?

Nope, none of these great teams. The record was set in 2004 when the University of Miami had six players drafted in the first round. Yes, SIX…

“The U”, under Head Coach, Larry Coker had won the BCS National Championship in the 2001 season and returned again to the National Championship Game in season 2002, albeit losing to Ohio State. By the end of the 2003 season, the U finished the season 11-2, defeating Florida State in the Orange Bowl. That team had exceptional talent on its roster with players who would go on to have long and illustrious NFL careers – Vince Wilfork, Frank Gore, Devin Hester, Chris Myers, Sean Taylor, Jonathan Vilma and DJ Williams.

So it was no surprise that the U’s players were in hot demand in the 2004 Draft. But six players being drafted in Round One? You would be forgiven if you didn’t believe it.

So, how did it play out? The talented free safety Sean Taylor was drafted with pick five by Washington. Taylor would make two pro bowl appearances in his four years in the NFL. His career was ended short after he was killed when he interrupted a burglar in his home. Taylor was voted in the top 80 greatest Redskins of all time and was inducted into the Redskin ring of fame.

With the sixth pick, Miami teammate and tight end Kellen Winslow was drafted by the Cleveland Browns. Winslow – who had won a National Championship in 2001 was considered the best tight end in College at the time – would go on to be a pro bowler with the Browns. He also played for The Buccaneers, Patriots and Jets. Outside of football, Winslow led a troubled life and is currently in prison serving a 18 year sentence for assault and rape.

With pick twelve, the New York Jets would select linebacker Jonathan Vilma. Vilma , who was born in Coral Gables, Miami (where the University is located) would go on to have a nine year career in the NFL, winning a Superbowl with the New Orleans Saints in 2009 and going to the Pro Bowl three times. Vilma would win defensive rookie of the year in his first season in New York. Since then, Vilma has built a successful TV career as an analyst with ESPN and now Fox Sports.

The Denver Broncos would join the Miami club with pick seventeen, when they selected another linebacker in the shape of DJ Williams. Williams had an eleven year career in the NFL, first with the Broncos and then with the Bears.

At pick nineteen, offensive tackle Vernon Carey would stay in state, when he was selected by the Dolphins. Carey would be a regular in the Dolphins line up until his retirement in 2011. One of Carey’s key attributes was the very low number of sacks he gave up in his career; In 2009, this number was as low as four sacks for the whole season.

Next up were the New England Patriots who at pick twenty-one would secure the services of a man who would hold the nose tackle position in Foxboro for the next 10 years. Vince Wilfork would win two Superbowls, become a 5x pro bowler with the Patriots and be voted on to the Patriots 50th Anniversary Team. In 2015 after a succession of injuries, Wilfork would sign with the Houston Texans where he would play until his retirement in 2017. Willfork – who embraced his move to Texas – will be well remembered for his love of dungarees and cowboy boots:

So all in all, the U could be pretty satisfied with their contribution to the NFL in 2004, a record which stands to this day. Incredibly the Miami Hurricanes would not go on to have the most players drafted in this class – that accolade would go to the Columbus conveyor belt, where The Ohio State Buckeyes would set another record with FOURTEEN players drafted.

And if that wasn’t enough, this draft produced another record – the most wide receivers ever drafted in the first round – seven. Yes, seven wide receivers in round one. For the record, those magnificent seven were, Larry Fitzgerald (#3), Roy Williams (#7), Reggie Williams (#9), Lee Evans (#13), Michel Clayton (#15, Micheal Jenkins (#29) and finally Rashaun Woods (#31).  And if you were counting, that was five wide receivers in the first 15 picks. Wow. Imagine that happening in April.

Of course this draft isn’t remembered for any of this. In fact I suspect you didn’t know any of the above. But you will know that 2004 is the draft where the San Diego Chargers somewhat stubbornly selected the Prince of Oxford, Ole Miss wunderkind Eli Manning, with the number one overall pick. Manning would famously refuse to play in San Diego and would be traded to the New York Giants, where Eli would win two Superbowls. As we know in that transaction, the Chargers would get their own QB for the next sixteen years, in what turned out to be a pretty good trade for the Bolts.

And if you still wanted one more fascinating fact – although I think you have been spoiled already – this NFL Draft is the only draft to produce multiple QB’s who have won multiple Super Bowl’s – Eli Manning (Superbowl XLII and XLVI) with the Giants and Big Ben Roethlisberger (Super Bowl XL and XLIII) with the Steelers.

END_OF_DOCUMENT_TOKEN_TO_BE_REPLACED
Get 20% off PFF ELITE and prepare to win in 2019!