In their first year under new head coach Matt LaFleur the Packers stormed to the NFC North title with a sparkling 13-3 record, including going undefeated in their division. However their season would come to be defined by struggles in the state of California – going 0-3 in games at the Chargers and twice in San Francisco, the last of which happened to be the NFC Championship Game which the Niners won handily.

With Aaron Rodgers under center it is tough to see anything other than a Super Bowl appearance as true success. But for a team with a first year head coach that have under-performed in the two seasons that preceded it, 2019 was a significant improvement. Questions will be asked about their form on the road in big games, especially given the manner of their defeats last year.

However, looking beyond the defeats that crippled the season there were plenty of positives. The Packers coasted to the division title with a perfect record and some impressive performances against their rivals. This, and a week seven game against the Raiders in which the offense started to click and fire on all cylinders, gave us a glimpse of just how good the Packers could be under Matt LaFleur.

The 2019 season was one of frustration for many Packers fans. Hamstrung by a lack of cap space following their 2020 spending they let veteran right tackle Brian Bulaga walk, and replaced him at a lower cost with Rick Wagner (formerly of the Lions). Wagner is coming off a year in which he struggled with fitness issues, but if healthy he could be a solid pickup on the right side of the line.

Linebacker Blake Martinez was paid handsomely by the Giants and replaced by former Browns backer Christian Kirksey. Kirksey is a different type of player than Martinez who is closer to a throwback linebacker; the versatility Kirksey offers should mean this move is seen as an upgrade for defensive co-ordinator Mike Pettine.

In the NFL draft the Packers shocked the football world by selecting Utah State quarterback Jordan Love with the 26th pick of the first round. Love has a big arm and big talent but is a developmental pick in the first round, when many thought the team could boost the pass catching weapons available for Aaron Rodgers. Drafting a replacement for the Packers legend was always going to cause a ruckus in the frozen north but it is a move that could prove to be a masterstroke in a few seasons time.

In the rest of their draft the Packers targeted run game pieces such as Boston College running back AJ Dillon and Josiah Deguara – a H-Back/Tight End from the University of Cincinnati. Late round defensive additions linebacker Kamal Martin (linebacker, Minnesota) and Jonathan Garvin (edge rusher, Miami) have the chance to be contributors in year one despite their low draft positions. This, combined with loading up on offensive line talent, rounded off an intriguing and different draft that I think will be viewed more kindly in five years than it is right now. 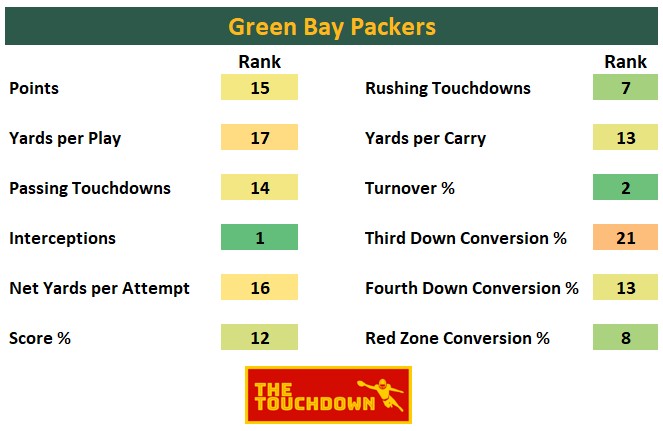 The 2019 Packers offense was built around a run game that was top five in the league per Football Outsiders’ rushing DVOA statistic. Third year running back Aaron Jones had a true breakout season in which he topped 1500 all purpose yards and 19 touchdowns. Jones almost doubled his touches in 2019 and the results were exactly what Matt LaFleur had hoped.

The passing game wasn’t quite as impressive as the run game but it still clocked in at number 11 in passing DVOA. The 2020 Packers may not be the explosive downfield passing attack they were in years past, but Rodgers’ ability to not turn the ball over and move the ball efficiently should keep them amongst the upper echelons of passing offenses this year.

The additions of Devin Funchess and AJ Dillion, plus the return of Equanimeous St Brown from injury, mean the Packers are adding to the weapons on this offense. Jimmy Graham’s tenure in Green Bay is over, but second year man Jace Sternberger has the chance to be a breakout player this season.

AJ Dillion has star quality as a tailback and will come in and compete with Jamal Williams for the secondary running back snaps – a battle the veteran will lose if the team can find a trade partner for him. A physical weapon, Dillion is straight out of the Eddie Lacy and Derrick Henry school of runner. If he can follow the development of the latter then the Packers have an exciting talent.

Year two in the LaFleur/Hackett offense will be very interesting for Packers fans. The team looked more comfortable as the season went on but never became the type of offense that could live with elite defenses. If the Lombardi trophy is going to return to it’s spiritual home in 2020 then the offense will need to take the next step in year two. Plenty of star quarterbacks have done more with less than Rodgers has, in 2020 it’s time to see vintage Aaron. 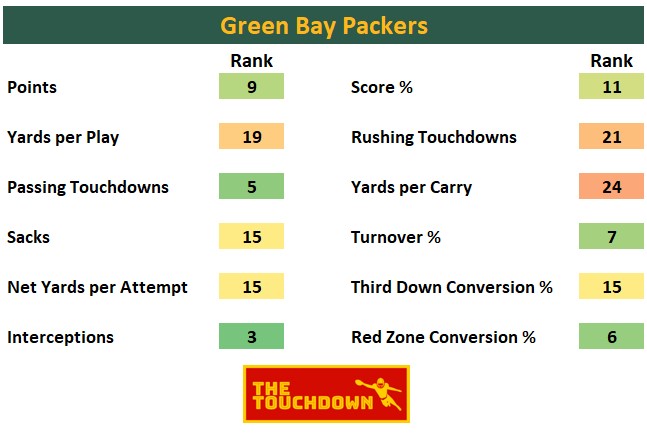 2019 was a tale of two defenses for the Green Bay Packers. Up front, the new pass rushing tandem of Za’Darius and Preston Smith combined for a league leading 25.5 sacks. Meanwhile, a young secondary led by breakout star Jaire Alexander was dripping with swagger but on occasion gave up big plays.

However the biggest problem for the 2019 Packers was in the run game. Consistently they gave up rushing yards and ranked 29th in rushing EPA per play allowed. In a passing league rush defense isn’t the worst area to have a weakness. But unless you have an offense capable of putting 30 points on the board with ease, having a weakness that good teams are able to exploit will see you bounced in January.

The good news for Cheesehead fans is that this team has stars off the edge, at defensive tackle and at corner. They also have a solid second rusher, second corner and safety. Some growth from the middle of the field and this unit has the potential to be one of the best in the league. After ranking 12th in EPA per play allowed in 2019, anything other than a top 10 finish will be a disappointment for this team and would put DC Mike Pettine firmly on the hotseat.

Opening the season at Minnesota in a game without fans is a tough start, but the lack of crowd is a leveller for the Packers. Games against the Vikings, Saints and Buccaneers in the first six weeks (Green Bay have a week five bye) will tell us a lot about this team. If the Packers are above .500 through six weeks of the season then this team can target 12 wins and a home game in week one of the playoffs.

Whilst this team can contend for a bye, the games against the Saints and the 49ers will be critical – and I think winning both may be slightly beyond them. As usual the North will be won by the team that fares best in the division games. The Packers have a fantastic recent record in that regard, and I think they continue to rule the roost without quite having enough to make a Super Bowl run.

The TOuchdown’s head of analytics Alex is a Texas Longhorns and Green Bay Packers fan who you will hear on the college chaps and seven step drop podcast!

END_OF_DOCUMENT_TOKEN_TO_BE_REPLACED
Get 20% off PFF ELITE and prepare to win in 2019!