College Football has it’s fair share of rivalries. But not many compare to when Texas & Oklahoma throw down every October. Guest writer Oli Hodgkinson takes a look at where the 2019 Red River Showdown will be won and lost.

It’s College Football gameday. Yet, the usually bustling streets around Oklahoma Memorial Stadium are eerily quiet. Some 390 miles away, at Texas Memorial Stadium, a similar scene is playing out. Somewhere in between, on the site of the State Fair of Texas, the usual inhabitants of the two stadiums have come together in a kaleidoscope of burnt orange and crimson and cream. It can only mean one thing. Red River Rivalry.

The Red River Rivalry, or the Showdown as it is now commonly known, is one of sports greatest rivalries. It pits the Oklahoma Sooners up against the Texas Longhorns, two programs that pure hate each other. To add to the sense of occasion and pageantry, the game is held at a neutral venue, The Cotton Bowl, during the weekend of the State Fair. Half of the 92,000 capacity stadium is filled with Longhorns fans, and the other half with Sooners fans, split straight down the middle. Thousands more fill the grounds outside to great an intense atmosphere.

There really is nothing quite like it. As former Oklahoma guard, Dru Samia, told me last year: 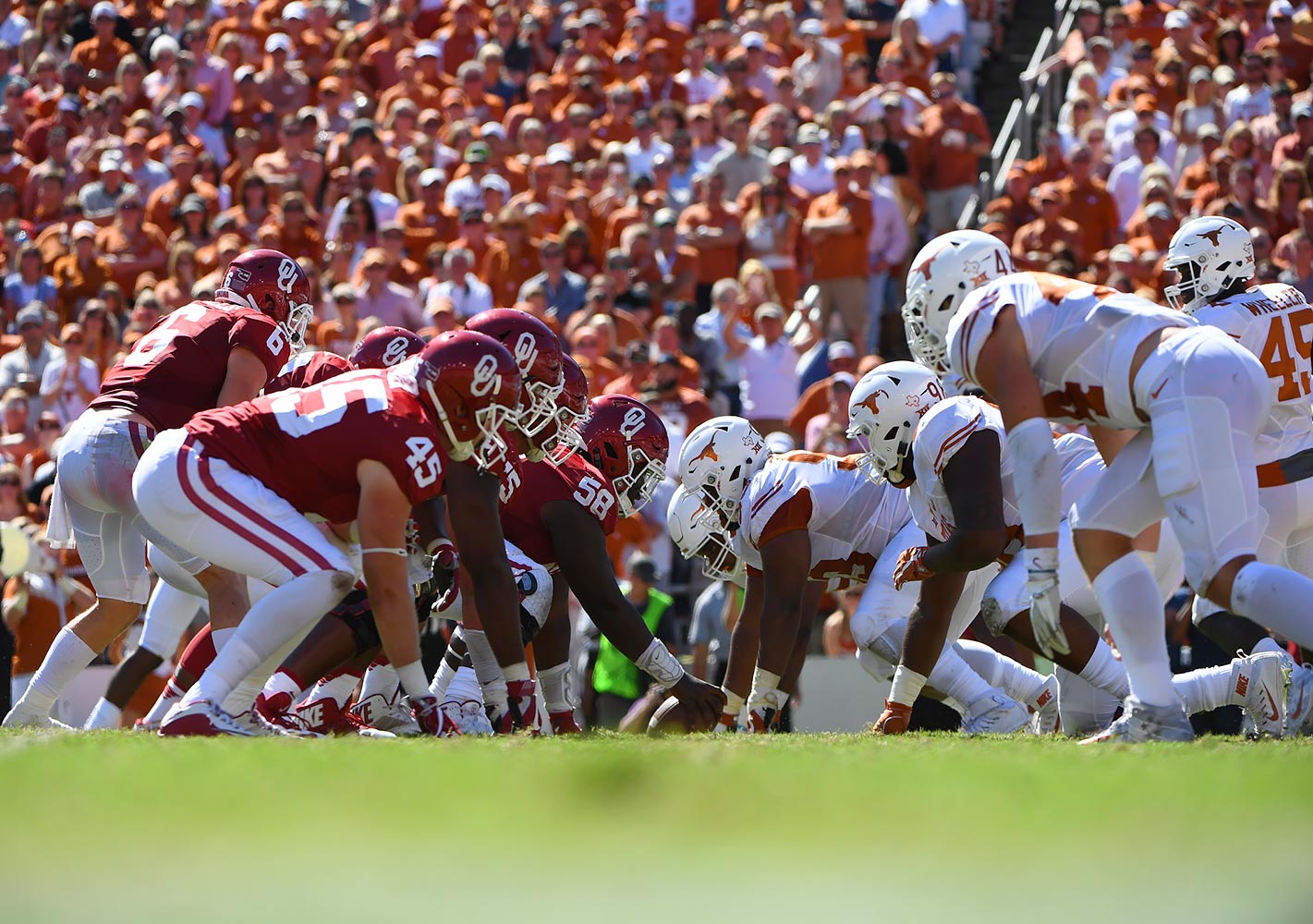 It’s a history and a hatred that dates all the way back to the first ever match-up between the two, back in 1900. There’s been scandal on and off the field. There’s been tight games and there’s been blow outs. Anything that you can think of on, and off, a football field has taken place during the Red River Rivalry. It’s truly the epitome of College Football.

Last year’s clash was a perfect example of the agony and ecstasy of the rivalry. The game had everything that you could wish for and more.

The Sooners got off to a flying start, indicative of their season coming into the game. Behind Kyler Murray, Oklahoma had an explosive offense and the Red River looked set to continue that trend. However, Sam Ehlinger and the Longhorns had other ideas. Some wizardry from the sophomore sensation saw Texas hold a 45-24 lead deep in to the third quarter. Murray and the Sooners rallied and with a little over 2 minutes remaining, tied the game. More drama was to follow. The Longhorns drove down the field, and with just 0:14 on the clock, bought the field goal unit on. An entire stadium held it’s breath, as kicker Cameron “The Kicker” Dicker gave the Texans the win and a 16 game cushion in the head to head record. 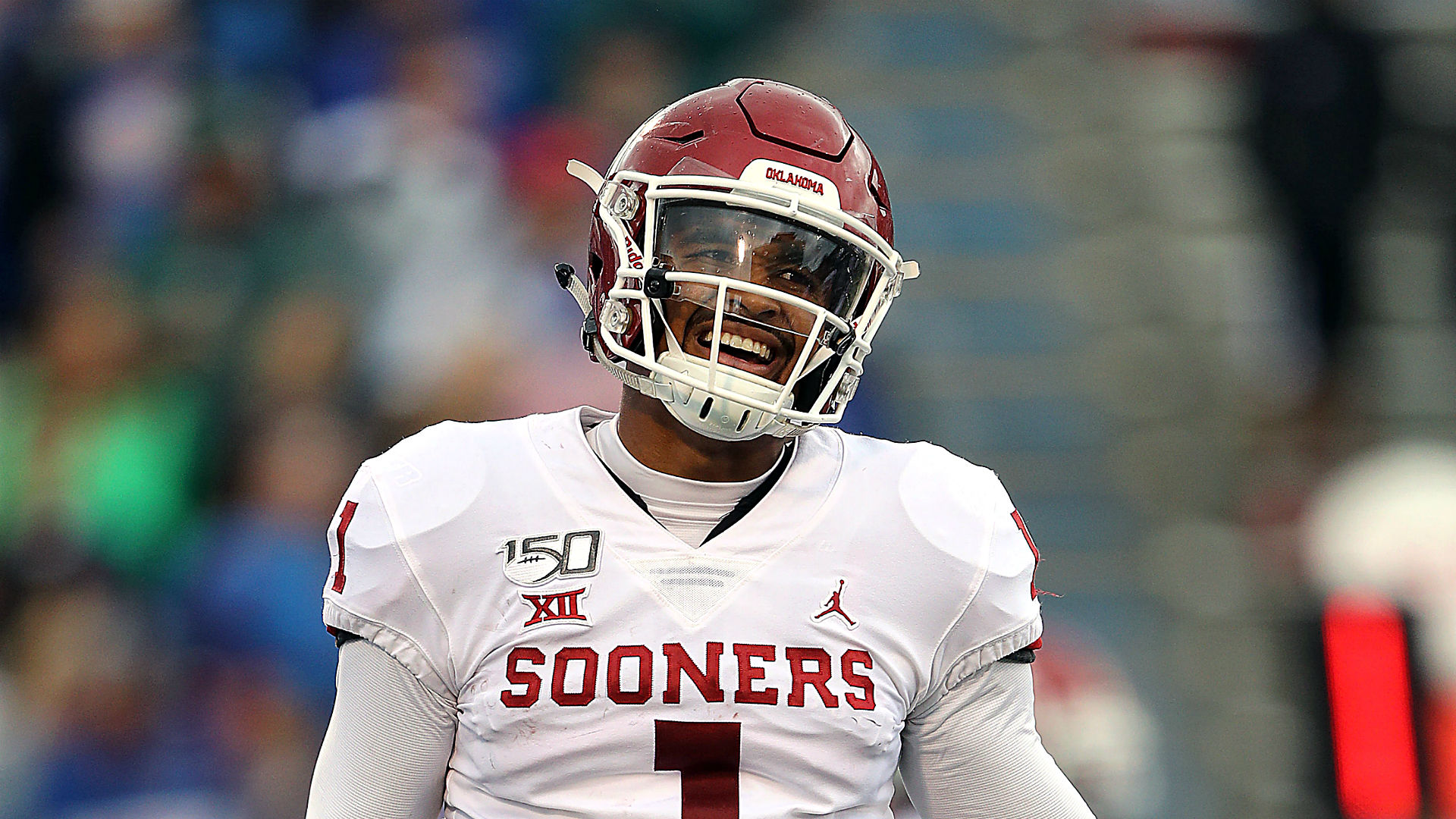 The 2018 edition serves as a perfect introduction to Saturday’s game.

Last year, the Sooners were an offensive juggernaut, and went into the game looking unstoppable, with a 5-0 record. The Longhorns, behind quarterback Sam Ehlinger, were 4-1 having tasted an early defeat, but having faced a tougher early schedule than their bitter rivals.

Which is where we find ourselves in 2019.

This year’s version of The Oklahoma Sooners juggernaut is headed up by Jalen Hurts. It is no understatement to say that Hurts is the front runner for the Heisman. Where there’s a deep history with the Red River Rivalry, there’s a recent history with the Sooners and the Heisman Trophy. The last two years they’ve seen a transfer quarterback come to life in Lincoln Riley’s system and walk away with College Football’s most prestigious award. Only a fool would bet against Hurts doing the same.

Behind him, Oklahoma are averaging an incredible 53.4 points per game. They’re putting up a staggering average of 644 yards per game. How do you even begin to stop that sort of production?​ 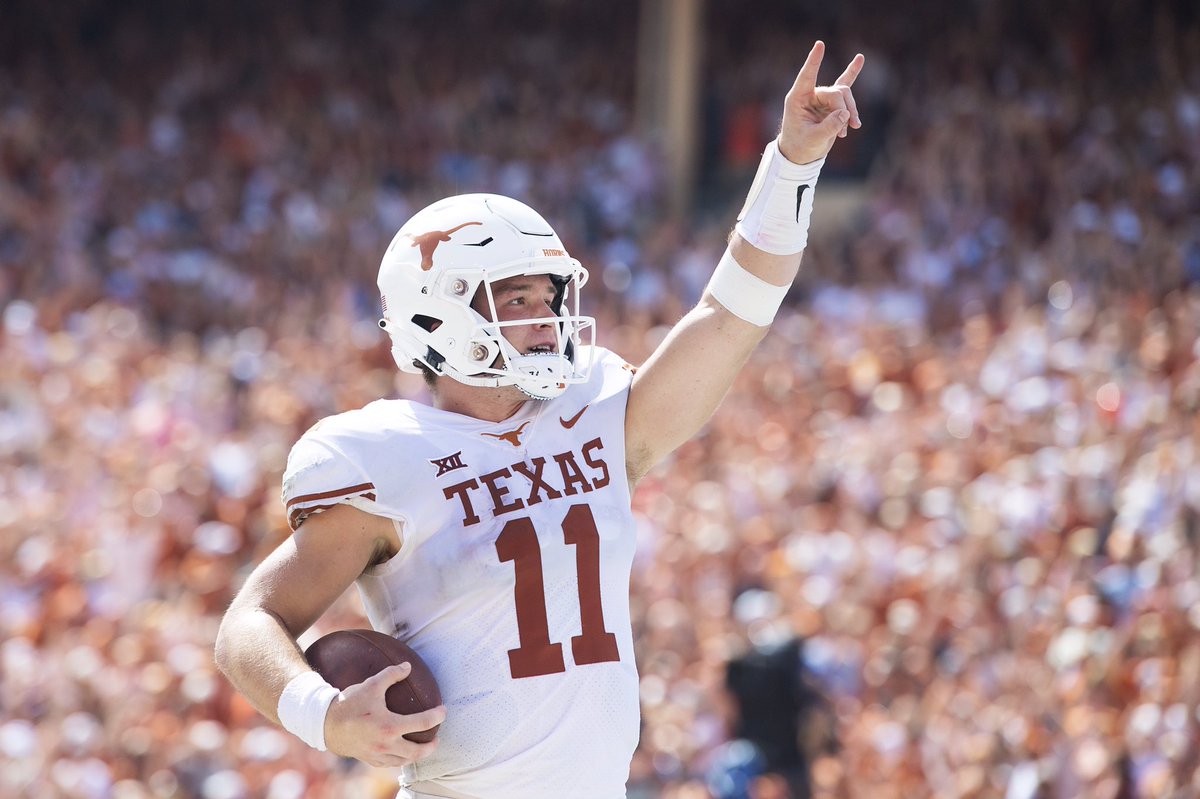 The question seems even harder to answer when you consider the Texas defense. For a start, it’s a unit that has been riddled with injury in 2019. The secondary has been decimated. The loss of Caden Sterns has been particularly difficult to come to terms with. As a result, they are giving up an average of 308 passing yards every game. In 3 of their 5 games so far in 2019 they’ve conceded 30+ points. Currently, they rank as the 5th worst passing defense (by average yardage) in the nation. To add insult to injury, they’ve conceded rushing touchdowns to quarterbacks in their last two games.

The Sooners go into the game as overwhelming favourites. ESPN has Oklahoma as a 79.8% favourite by their Football Power Index.

However, there are reasons to believe that the Longhorns can be successful on Saturday. Last year, Sam Ehlinger put up a record offensive performance. He easily has the talent to go toe to toe with Hurts in a gunslinging, pass for pass shootout. The junior QB is 6th in the nation for passing touchdowns, plus he has a decent 69.4% completion percentage. 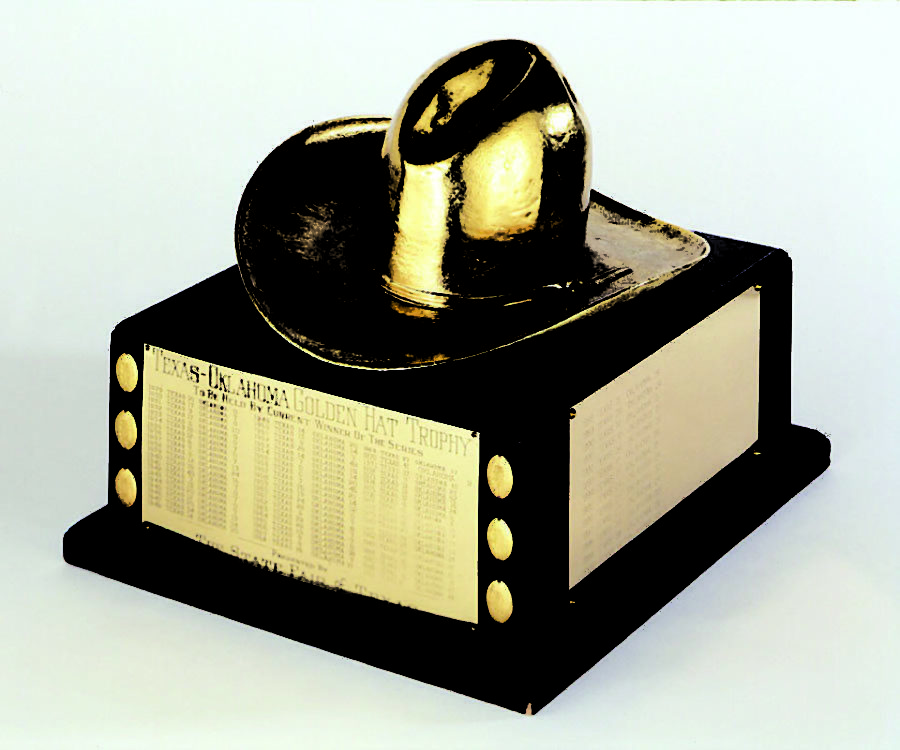 Texas would be well advised to take a page out of the history books in looking for the key to a victory.

Back in 2015, the Longhorns trampled all over the Sooners behind an incredible ground game. Led by D’Onta Foreman, Texas put up 313 rushing yards to shock Baker Mayfield’s Oklahoma team.

Igniting the ground game may well be the way to success again on Saturday night. Firstly, the Texas rushing attack is currently very middle of the road so leaning heavily on the ground game would be surprising to the Sooners. Secondly, establishing the run game would help keep Jalen Hurts off the field, which in turn would help the Longhorns defense.

Where Texas put up 313 yards back in the 2015 game, leading rusher Keontay Ingram has just 313 yards for the season. It’s a disappointing number for a player who was expected to be a key figure in the Longhorns offense for 2019. He has battled with some injury issues during the season, but he looks set to be ready and raring to go for the Red River Rivalry. What better game to have your best performance of the year?

Whether you’re crimson and cream, or you’re burnt orange, or somewhere in between, Saturday’s game promises to be another thrilling contest. So grab yourself a Lonestar Beer, get ready for a wilder ride than on the Sooner Schooner, and enjoy the greatest rivalry game that College Football has to offer.

Twitter Envelope
 5/5
2019-10-10
Previous Post: NFC SOUTH Preview: Panthers vs. Buccaneers in London
Next Post: Film 5 Week Review: How the Raiders ran all over the Bears in London

END_OF_DOCUMENT_TOKEN_TO_BE_REPLACED
Get 20% off PFF ELITE and prepare to win in 2019!