Atlanta Falcons: Consistency, but at what cost?

The 2019 season was yet another to forget for the Atlanta Falcons, even if they did finish 7-9. 2018 could largely be forgiven thanks to a myriad injuries, but 2019 was supposed to be a bounce back. Significant investment across the offensive line was made to protect their franchise Quarterback, two free agent guards were added in free agency, and two offensive linemen were taken in the first round of the draft, yet Atlanta gave up 50 sacks over the course of the year.  They staggered to a 1-7 start, the season was over before the bye.

Despite the the start, the Falcons rounded the season out pretty well. 6-2 after the mid-season bye, including wins on the road to New Orleans and San Francisco, meant Atlanta head into the off season on something of a run.

As Dan Quinn gears up for his sixth offseason as the Head Coach of the Atlanta Falcons, questions have never been louder surrounding his position. Over five full seasons leading the side, Quinn has missed the playoffs three times, and, were it not for the 2016 season, could conceivably be plying his trade elsewhere as a defensive coordinator.

Quinn took over in 2015, with the objective of fixing what was an incredibly soft defense left by Mike Smith. In that time, his defenses have ranked inside the top 15, for both yards allowed and points allowed, only twice. Quinn put himself in charge of defensive play calling for 2019, and gave up 20 points or more every week for the first 8 weeks of the season.

It was only when he relinquished that role when the Falcons defense came alive, somewhat. Whatever you want to say about Quinn, having the ability to adapt his role to help the team certainly shouldn’t be marked against him.

This ability was the key reason behind owner Arthur Blank’s decision to keep his head coach, despite back to back losing seasons. Quinn, 12 year General Manager Thomas Dimitroff, and Offensive Coordinator Dirk Koetter, were all retained with the Falcons pursuit of better results in 2020. Whether they have deserved it is questionable, and while Blank is famously loyal to his staff, that loyalty can only stretch so far. 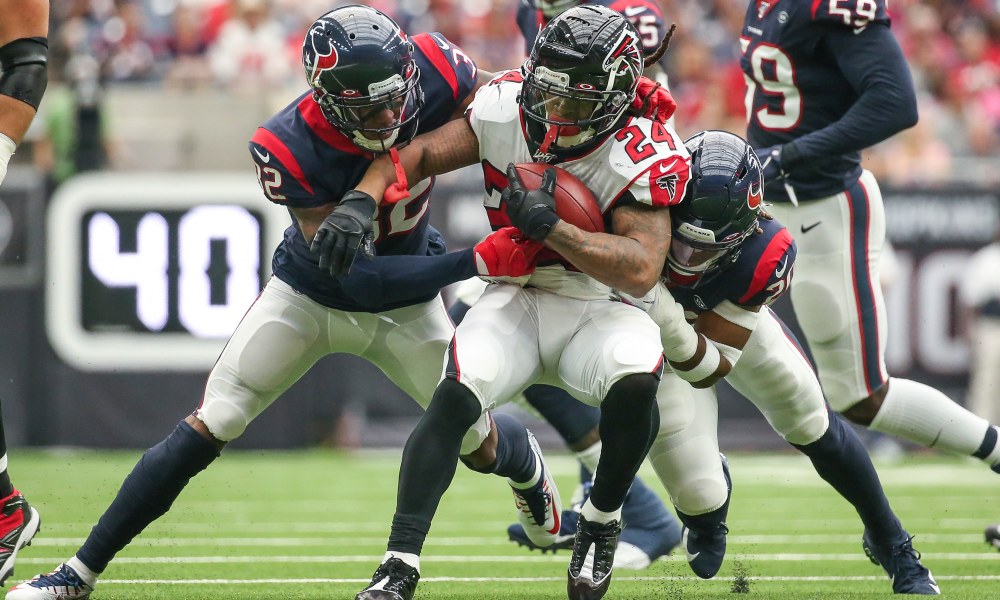 To say the Falcons are in a bit of a hole is something of an understatement. Only the Steelers, Jaguars and Vikings have less room to manoeuvre, and you could make arguments that all three sides have more talent to start with.

If not managed correctly, struggles can be the price of past success. While it was short, the Falcons were undeniably successful for a stint in the middle of the decade, and that came with a price to end the decade. Matt Ryan and Julio Jones, for example, played to a level deserving of being paid among the best at their positions. Young upstarts, Deion Jones and Grady Jarrett, have shown enough in their respective 4 and 5 years in the league to warrant increases. The problem is those players are then paid significantly more than they were on their rookie contracts.

Such examples can be found in Devonta Freeman. The half back became a crucial member of the Falcons relative successes, stringing four successive seasons of over 4 yards per carry together meant he got a massive contract extension. Poor offensive line play aside, Freeman now looks to have lost a step, likely thanks to injury. Moving on from Freeman could free up in excess of $6 million, and perhaps even see the running game rejuvinated with someone else driving it.

The Falcons have already begun the process of freeing up space. Both Matt Ryan and Grady Jarrett agreed to turn some of their contract into a signing bonus, putting them in the position they are currently in. Further moves like that with Desmond Trufant, Jake Matthews, and even Julio Jones, could go a long way to helping the side financially.

The Falcons will need every penny of that space for a number of reasons, and none is bigger than Austin Hooper. The 4th year Tight End became something of a security blanket for Matt Ryan in 2019. Set to hit free agency off the back of his best season yet, Hooper will be a man in demand, and the Falcons would be wise to retain the services of the dynamic tight end.

On the other side of the ball, Hooper’s draft classmate, De’Vondre Campbell, is also due an extension. Campbell has been a vital piece next to Deion Jones, and rumour has it Atlanta is keen on keeping Campbell, as they look to keep their current linebacker core intact.

Less obvious is what is to become of Vic Beasley Jr. Beasley led the league in sacks back in 2016, yet failed to build on that stunning platform. Failing to amass more than 10 sacks in a season since (5, 5, and 8 in the seasons following), it remains to be season whether Atlanta will opt to bring back the native Georgian.

Including these bigger names, Atlanta have 23 players set to hit free agency, all of varying ability. While it would be nice to keep everyone around, the price of (relative) success is that you can’t pay everyone, and everyone wants to get paid. Falcons fans would be wise to get used to the idea of a very different looking set of players in 2020.

Despite a defensive line made up of several early round draft picks, the Falcons finished with 28 total sacks in 2019. That, simply, isn’t good enough. The likes of Takk McKinley, Vic Beasley, Adrian Clayborn et al. should all be doing a far better job getting to the auarterback. When only half a sack separates your former 1st round pass rusher from your former 5th round defensive tackle, you know there is a problem.

The Falcons are crying out for help on the defensive line. It should be apparently to everyone associated with the side that opposition Quarterbacks are getting far more time than they should be. Dimitroff and Quinn absolutely have to prioritise securing a disruptive Defensive End so they can, at the very least, improve on that utterly pathetic sack total.

Incredibly, despite spending two first round picks on Offensive Linemen in 2019, the Falcons, again, require help along the line. When he played, Chris Lindstrom looked very solid, and Kaleb McGary improved as the season progressed. As Arthur Blank pointed out not too long ago, however, Matt Ryan is a far better quarterback vertically than he is horizontally.

You can also argue that Freeman’s production took a hit thanks to the play of his blockers. There are schematic issues (Dirk Koetter’s history with the run game speaks for itself), but any back that steps up in Freeman’s place will have the same issues as he did.

The Falcons could, and probably should, focus on rebuilding their trenches. Realistically they require a guard to step in in the short term, and should also be looking at longer term options in the center position.

END_OF_DOCUMENT_TOKEN_TO_BE_REPLACED
Get 20% off PFF ELITE and prepare to win in 2019!