Al Michaels and the most bizarre trade in NFL history

The most bizarre trade in NFl history

With the 2020 NFL season officially open, the door is truly open for teams to try and make themselves better, by any means. Free Agency is the headline attraction of the season’s opening few weeks. Among the big names to make unexpected moves (see Tom Brady to the Tampa Bay Buccaneers), and medium names earning big pay days (see Austin Hooper to the Cleveland Browns), the opening blows of free agency dominates the early weeks of any new season. What often plays second fiddle to free agency is the ability teams have to make trades. Again, some are pretty run of the mill (Hayden Hurst to the Atlanta Falcons), others are the definition of blockbuster (DeAndre Hopkins and a 5th round pick to the Cardinals for David Johnson and a 2nd?!?). When trades are big, they are very big.

While this NFL season has already seen its share of noteworthy trades, none compare to one that took place in 2005. It doesn’t involve any of the teams you recognise, or players you’ve heard of, but it’s one that was so strange it still doesn’t feel real talking about it now. It doesn’t see any players, coaches, or draft picks dealt. Those involved include a fresh faced studio executive, a legendary sports commentator, and a cartoon rabbit. Let me tell you about the most bizarre trade in NFL history.

Our story begins, as all great stories do, in 1927. The New York Giants had been crowned the National Football League champions, Cardiff City had beaten the might of Arsenal in the FA Cup Final, and Louis Armstrong’s legendary music career was just getting underway. The roaring twenties truly was building to an unforgettable finish.

Among the hustle and bustle, a burgeoning Chicagoan animator/director, was slowly taking over the animation field. Having found success in cartooning with their live action/animated hybrid “Alice Comedies” series, Walt Disney (teamed with his main animator, Ub Iwerks) struck a deal with Universal Pictures. The cinematic giants were looking to get into the world of animation. Thanks to the negotiating power of distributor Chares Mintz, Disney and his team were primed to achieve that goal.

Disney and Iwerks produced a mascot to rival the likes of Felix the Cat. Following a vigorous workshop of ideas, and Universal Studios picking the characters’ names out of a hat, Oswald the Lucky Rabbit was born. He debuted in the animated short “Trolley Troubles”.

Oswald was a hit. The success allowed Disney to expand his team to 20 members of staff. Over a year and a half, Walt Disney netted $100 a week, with a $500 per episode bonus, split 60/40 with his brother Roy. Meanwhile, Oswald the Lucky Rabbit cemented himself as THE cartoon mascot. With Disney’s studio seemingly unable to do anything wrong, he travelled to New York. There, he had the intention of negotiating a more favourable contract with Mintz, and to continue working on Oswald’s adventures. He was slapped with an offer of a 20% pay cut.

A combination of the insulting offer, and the fact Mintz had been hiring animators away from the studio over the course of the relationship, led to Disney walking away. Hurt, and facing a lengthy journey back to California, Disney set about designing a new mascot. One that would rival Oswald. One that Disney would have full creative and financial control over.

Oswald would be consigned to mediocrity and obscurity from that point forward. Disney, however, would work on the mishaps of a mischievous mouse. The rest, as they say, is cinematic history.

Fast forward some 75 (or so) years, and the entertainment world is a vastly different place. The successes of Mickey Mouse catapulted Disney and his company into another stratosphere. The corporation not only created and distributed animated features, but had controlling stakes in the American Broadcasting Company, and ESPN. Things weren’t totally rosy in the House of Mouse, however. In 2005, CEO Michael Eisner was facing an internal battle to save his job. Walt Disney’s nephew, Roy E. Disney, had begun a campaign against Eisner. He considered the company to have lost its way under the businessman’s stewardship. The campaign threw its support behind Bob Iger, and Iger was successfully named the company’s CEO that same year.

Part of the reason for Roy Disney’s support for Iger was his commitment to putting animation back at the fore of Disney’s operation. In 2006, following the acquisition of Pixar Animation Studios, Disney said “Animation has always been the heart and soul of The Walt Disney Company, and it is wonderful to see Bob Iger and the company embraces that heritage by bringing the outstanding animation talent of the Pixar team back into the fold.” Clearly, the company was focusing on its roots to build for the future.

Al Michaels is a name that, since 1977, was synonymous with ABC Sports. He was the voice of the USA’s legendary “Miracle on Ice” victory in the 1980 Winter Olympics, various MLB World Series during the ‘80s and, most relevant here, ABC’s coverage of Monday Night Football. From 2002, Michaels had shared the booth with John Madden, and the pair were very well received by the public. 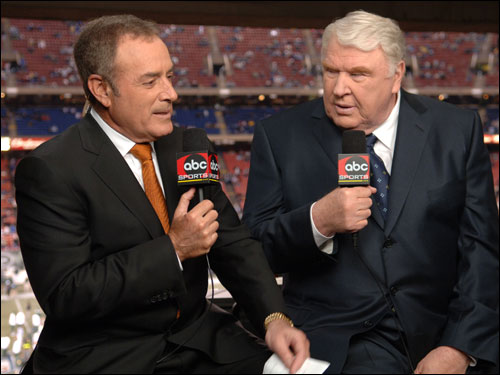 In 2005, ABC lost its rights to broadcast Sunday Night Football. NBC, a Universal Pictures owned broadcaster, offered to pay a cool $600 million a season for the rights, starting from the 2006/07 season. Looking to make a splash on their Sunday night broadcast, NBC hired John Madden into the role of colour commentator, and hoped to pair the duo on their own coverage. The problem? Michaels signed a long term contract with ABC only a few years previous. With Monday Night Football transferring to ESPN, ABC was left with no NFL coverage whatsoever, and two separate teams of sportscasters in employment. From there, an unlikely scenario wormed its way into the mind of Iger.

Following Super Bowl XL (Steelers 21, Seahawks 10), Michaels made his bosses at ABC aware he wanted to be released from his contract. His intention was to join Madden at NBC on Sunday nights. This information made its way to Bob Iger through George Bodenheimer, then President of ESPN. Iger responded simply; “I’d be willing to let Al Michaels go if you can get us the rights to Oswald the Lucky Rabbit from NBC.” The challenge was set.

Negotiations were pretty swift from that point forward. Conversations between Bodenheimer and his NBC counterpart, Dick Ebersol, revealed how little the company knew of the character. The question “who, or what, is Oswald the Lucky Rabbit?” was asked on more than one occasion. The individuals involved did the research required into striking the deal. While he was largely irrelevant to Universal, Oswald was still held in high regard within the Disney Corporation.

On February 9th 2006, Disney announced that Oswald would be returning into their fold, via a press release on thewaltdisneycompany.com. That same day, NBC released a statement that they would be reuniting the Madden/Michaels partnership for their brand new Sunday Night Football programme. The terms of the agreement were that, in exchange for the trademark and intellectual rights to Oswald the Lucky Rabbit, Disney would release Al Michaels from his contract, allowing him to freely sign with NBC. For all intents and purposes, Al Michaels was traded to NBC for Oswald the Lucky Rabbit.

Who won the trade?

With hindsight being 20/20, on the face of things, NBC appear to be the clear winner of the trade. Al Michaels remains the voice of Sunday Night Football to this day, albeit alongside Chris Collingsworth rather than John Madden.

For Disney, and for Iger in particular, the trade represents more of a symbolic move than a pro-active one. Following the trade, in the announcement release, Diane Disney Miller, daughter of Walt Disney, said “When Bob was named CEO, he told me he wanted to bring Oswald back to Disney, and I appreciate that he is a man of his word. Having Oswald around again is going to be a lot of fun.”

Despite making the move, Disney have seldom used Oswald since 2006. The character’s most prominent role was in Epic Mickey, a Nintendo Wii title released in 2010. The title focused on Mickey Mouse traversing a land dedicated to forgotten Disney characters of the past, in which Oswald the Lucky Rabbit was the de-facto leader. It was successful enough, shifting over 2 million copies in North America and Europe alone. Its sequel, Epic Mickey 2: The Power of Two, despite releasing on Playstation 3, Playstation Vita, Xbox 360, Nintendo Wii, Nintendo Wii U, and PC, was not. The studio behind the titles was subsequently closed. Aside from a brief appearance in Mickey Mouse short, Get a Horse! in 2013, Oswald has barely been touched, outside of merchandising opportunities and Disney Park appearances.

In March 2020, rumours began to swirl that ESPN was considering revamping their Monday Night Football package. Tony Romo had signed a long term contract with CBS, ending their interest in that  particular catch. The most logical Plan B? Pay Peyton Manning $20 million, and trade for Al Michaels. This rumour pushed one insider to suggest “we can find out what a trade for Al Michaels would go for.”

This is a fantastic story, if only so we can find out what a trade for Al Michaels would go for. If football teams can trade players, why can’t other businesses? Really opens the door... https://t.co/vcHnuyuvTH

We already know what a trade for Al Michaels would go for. It’s Oswald the Lucky Rabbit.

END_OF_DOCUMENT_TOKEN_TO_BE_REPLACED
Get 20% off PFF ELITE and prepare to win in 2019!