2020 Offensive Player of the Year Candidates

2020 OFFENSIVE PLAYER OF THE YEAR CANDIDATES

The MVP award has become somewhat of a predictable award to predict, with 16 of the last 20 winners having been quarterbacks (4 running backs). However, the spread of winners when it comes to both the OPOY and DPOY has been more widely spread. Therefore, examining the candidates for those awards is a more fruitful exercise. First up we will examine the 2020 Offensive Player of the Year candidates,

The Recent History of the Offensive Player of the Year Award

As stated above, since 2000 7 QBs who have won OPOY have also won MVP the same year, with 4 RBs achieving the same feat. In the years where it wasn’t the same player, the MVP has always been a QB, while the OPOY has been a QB twice (both times Drew Brees), a RB six times (each time the season leader in either rushing yards, TDs and/or scrimmage yards), and a WR once (Michael Thomas in 2019). Essentially, the OPOY is given to either the QB or RB who is the most dominant at their position. In the case of Thomas, it required him to break the record for the most receptions in a single season to win the award.

Additionally, the OPOY also frequently has a strong playoff run; a majority of the recipients have either made a Super Bowl in the year they won the award, or at the very least their Conference Championship Game. For many, there is also a record broken or close to being broken, helping develop a narrative around them. For instance, in Adrian Peterson’s 2012 season (when he won both OPOY and MVP), he was close to breaking the single season rushing yards record, and in DeMarco Murray’s 2014 OROY season, he broke the Dallas Cowboys’ single-season rushing yard record (previously held by Emmitt Smith) as well as Jim Brown’s record for consecutive 100-yard rushing games.

In order to win the OPOY, a player almost needs to have a historic season in some capacity. For a WR, this is hard to achieve, as even when Calvin Johnson broke the single-season receiving yards record in 2012, he was unable to win the award. RBs can win the award as the season rushing yards leader, but usually need some other feat to go with it, such as LaDainian Tomlinson’s 31 TD season in 2006.

QBs need to either break records or put up a lot of points, which usually also lands them the MVP award. The two times Drew Brees won the OPOY award (but not the MVP), he was part of a high-scoring offense and in 2011 broke the single-season passing yards record. Why he didn’t win the MVP award as well is debatable. Essentially it comes down to how the MVP award is defined, which is the single player that accounts for the most wins, and there can thus be some slightly different interpretation as to why a team wins its games, similar to Wins Above Replacement in baseball.

With these facts in mind, the players listed below are all potential candidates for OPOY in 2020. No Tight Ends or OL have been identified, as history suggests they are unlikely to win the award. 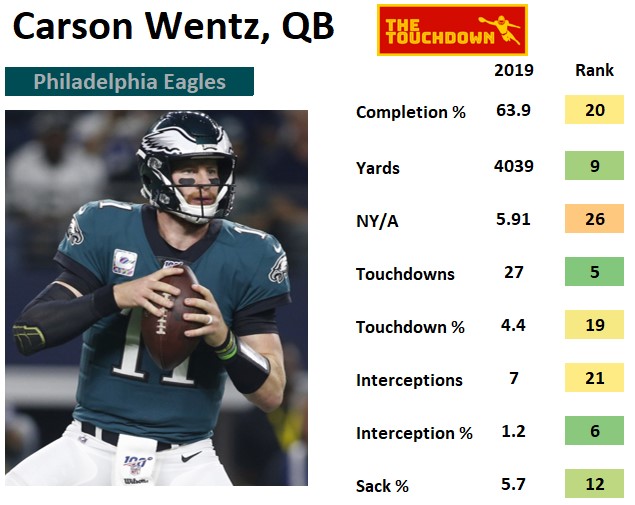 Wentz will have an uphill battle to get ahead of the other QBs on this list, but he also has one of the better offenses in the league to work with. Wentz’s big issue in his career has been injuries to him or his receivers. However, if it all breaks right, then Wentz could have a career year and one of those seasons that stands above everyone else.

Although he’s an outside chance at the OPOY, if Adams was to break the WR single-season TD record of 23 TDs (or even break 20), he’d at least be in the discussion. He is among the league leaders in team target percentage, so he’ll get plenty of opportunities. The problem is that if he has that kind of year, chances are Rodgers overshadows him.

Watson is not high on the list given his situation, but has the skillset it takes to win the OPOY. With Hopkins traded away, a lacklustre OL and receiving corps, the Texans’ QB needs to find another level in 2020. If he can do that, he will enter the discussion as the most dominant QB, and therefore a potential OPOY.

Since 2013, Jones has averaged over 100 yards per game, and has averaged the highest yards per touch in multiple seasons. While he may need more TDs to support his case, Jones has been so incredible throughout his career that it isn’t too much of a stretch to suggest he could be one of the rare WRs that has a shot to win OPOY.

It is hard to see Thomas having a better season than the one he just had, but he has to be a consideration with Brees back at the helm for a whole season. He may not be in the receiving yards competition, but he has a shot at moving the receptions marker even higher.

It is perhaps surprising that Wilson hasn’t won one of the league’s top honours before. Yet he’s barely thrown for more than 4000 yards most seasons, and has had strong defenses in most seasons that have stolen the limelight. Wilson needs to hit a new level in 2020, in which he is dominant every week and separates himself from other QBs in some way.

It is hard to discount a QB with Rodgers’ skill set, especially when he’s a former MVP. While the Green Bay offense doesn’t seem to be encouraging Rodgers to let loose every week, he still has the ability to lead the league in passing yards and/or TDs.

Cook is such a prominent part of the Vikings’ offense that he could get close to Chris Johnson’s scrimmage yards record of 2509 yards. With close to 1700 scrimmage yards in 2019 over 14 games, another step forward and playing the whole season could see him get close to that mark.

In an era of young QBs who succeed with both their arms and legs, Murray could be the next in that mould. He won the OROY in 2019, and with a step forward and a better supporting cast, Murray could post big rushing numbers as well as a strong return in passing yards. If the Cardinals have one of the highest yards per game on offense, Murray would be the reason why.

He has previously been an MVP and has a strong offense around him. Ryan has also been very consistent, throwing for over 4500 yards each season (except for 2017), and if he remains among the top passers in the league, is another name to watch. 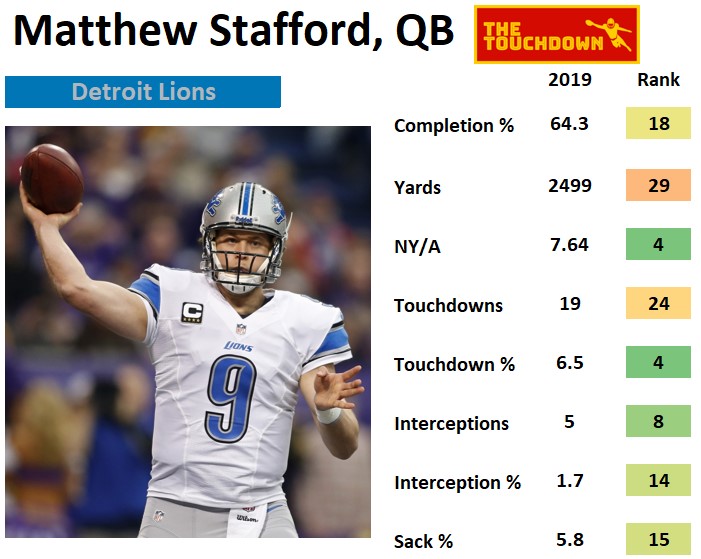 Although Stafford’s 5000 yard 41 TD season was almost a decade ago, he was close to that pace over 8 games in 2019 before injury. A strong season on return from injury for Stafford could see him post career numbers, and as the history of the award indicates, dominant QB displays earn OPOY awards.

With his big play ability and success as a receiver, Barkley has the potential to be one of the top RBs in the league. Should he reach his potential that he flashed in his rookie season when he won the Offensive Rookie of the Year, Barkley has a chance to be the best RB in 2020.

When we talk about scrimmage yards records, McCaffrey has maybe the best chance to get there, as he had just under 2400 yards in 2019. Should he add another 120 yards in 2020, it would be hard to argue against McCaffrey winning the OPOY award

With a strong 2019 behind him and a new Head Coach in Mike McCarthy, who was HC when Rodgers won the MVP, Prescott could be unleashed even more in 2020. He has the weapons he needs around him, and could get the statistical numbers that set him apart from his counterparts.

Last year’s rushing title winner could easily be the rushing leader again this season. A repeat, or perhaps even improved, performance will be hard to ignore, especially if he carries the Titans back to the playoffs.

After nearly winning the OROY award in 2019, Jacobs could become the next dominant force at RB. He can gain yards as both a runner and a receiver, and has a strong OL in front of him. With a passing attack that is unlikely to blow anyone away, Jacobs is the centrepiece of the Raiders’ offense. That gives him an outside chance at breaking a single-season scrimmage yards record. 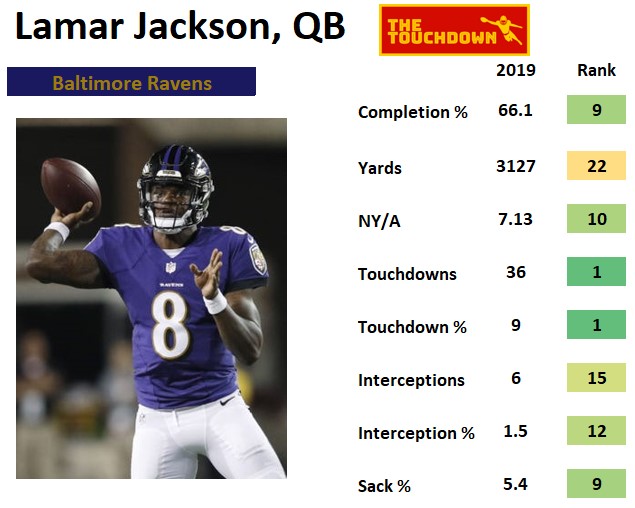 The reigning MVP, Jackson will nearly always put himself in the discussion for OPOY with his combined passing and rushing yards. If he develops as a QB and connects with his receivers, he could account for the most yards by a single player in a single season ever.

2019 was a superb season for Chubb, as he finished second in rushing yards, just shy of 1500. He will face a threat for touches from Kareem Hunt but in an offense that should build itself around the run game, Chubb could top 1500 yards and improve on his eight touchdowns from last season.

The 2018 MVP is fresh off a Super Bowl victory, having already proven he can do it all. He has perhaps the best overall arm in the league and is poised to break the single season passing yards and/or TD record at some point. Mahomes will be a perennial OPOY candidate for a while to come.

END_OF_DOCUMENT_TOKEN_TO_BE_REPLACED
Get 20% off PFF ELITE and prepare to win in 2019!