With the 2020 NFL Draft in the books its time to shift focus towards the 2020 college football season. In this article I look at the top options for the tight end and offensive line positions. It is in this latter group that the best player in college football resides. Offensive linemen don’t win the Heisman Trophy but it will lose all meaning if he doesn’t get invited to the show… 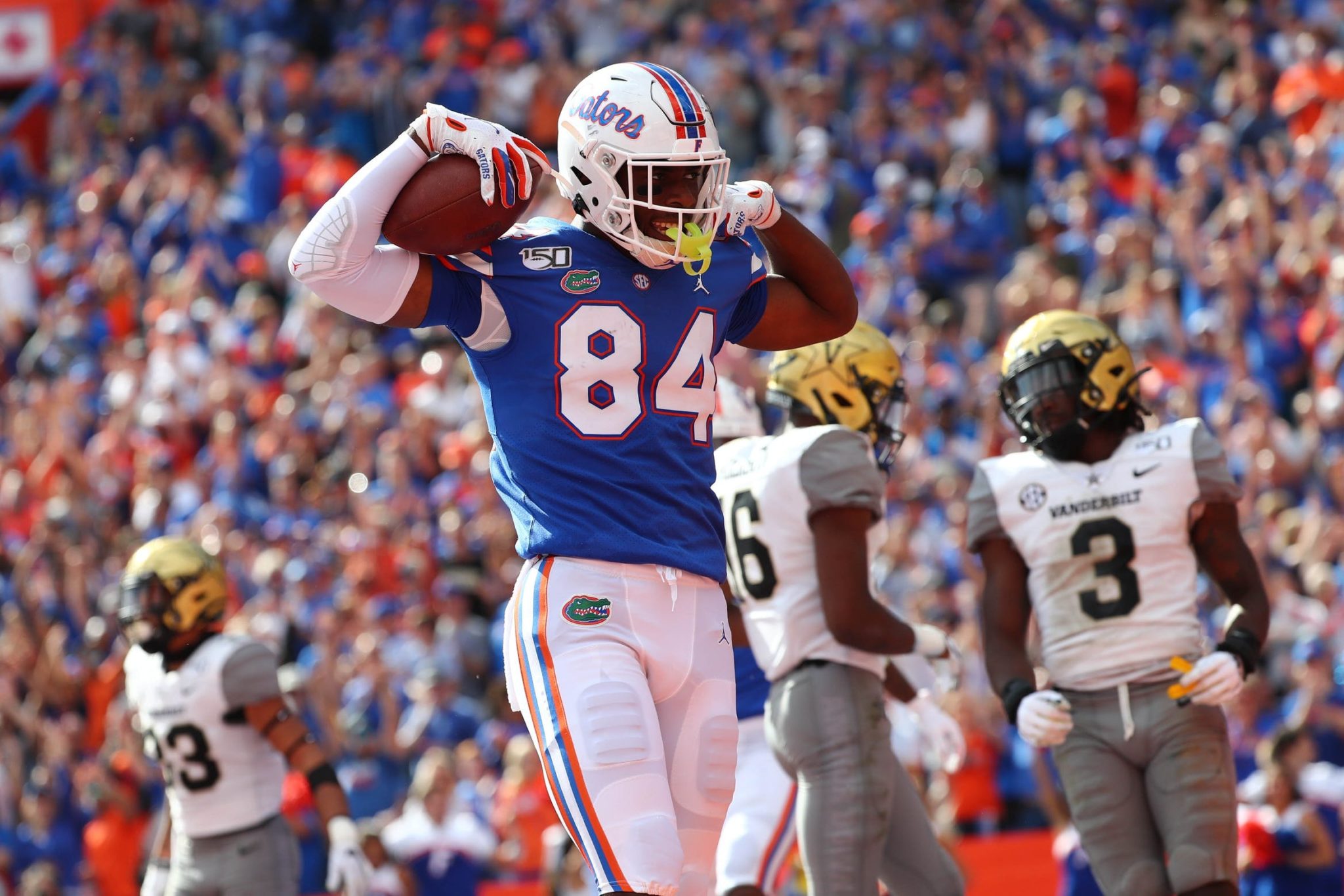 Kyle Pitts Jr is a do-it-all weapon for his namesake QB Kyle Trask, who is due a big season after flashing in recent times. A big body who can run routes, Pitts consistently makes contested catches over the middle of the field, and burns defenders with significant YAC ability. A solid blocker who could show slightly more fire in this area of the game, but his style is far more TJ Hockenson than Noah Fant. Pitts will benefit from the departure of wide receiver Van Jefferson as I expect Florida to use him as a big slot in some packages, scheming some more touches for him that way. After putting up 650 yards and 5 touchdowns last season, I’d expect Pitts to break out in a big way this year. 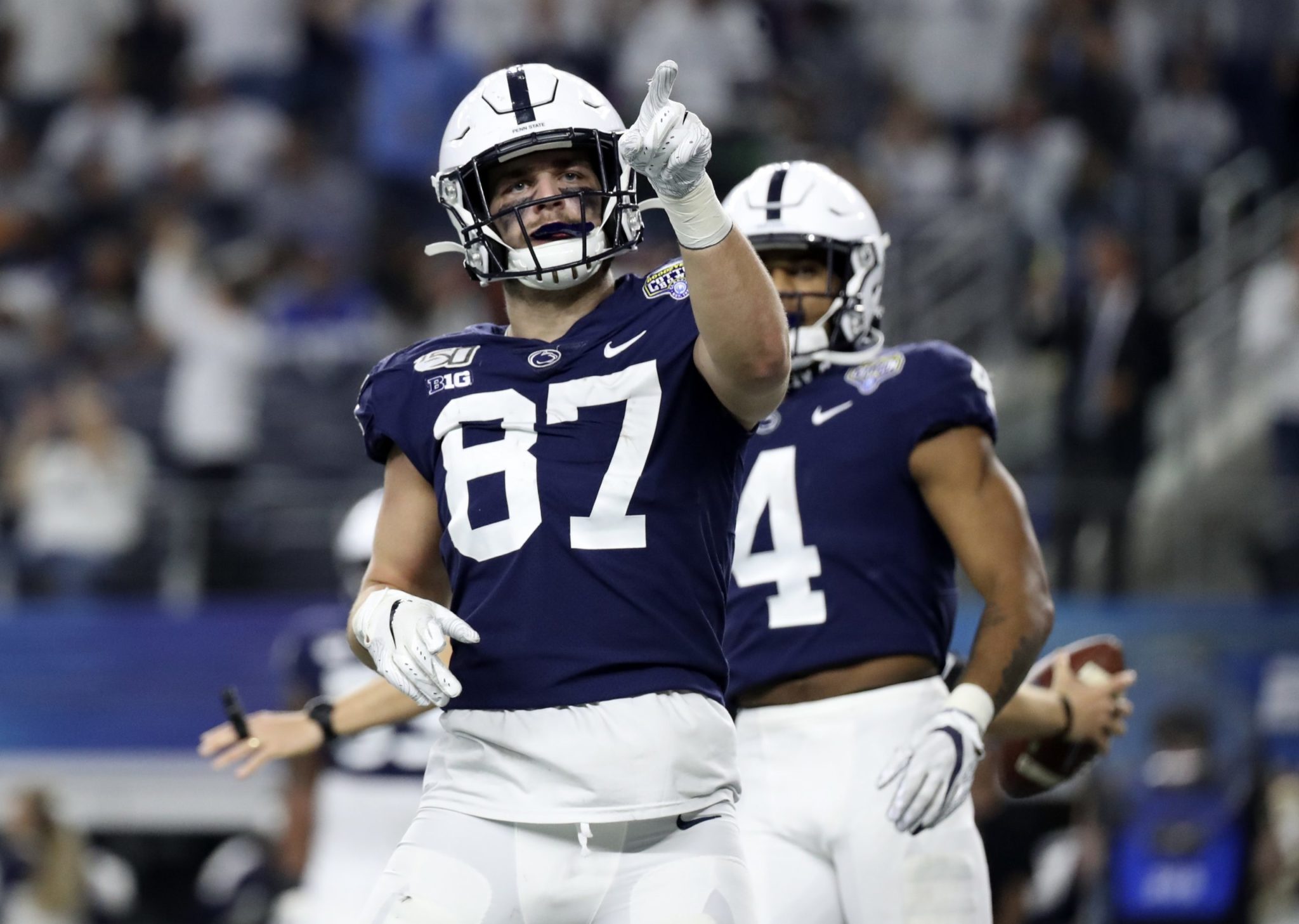 Going in to the 2020 season Freiermuth is tied for the Penn State career touchdowns record for a tight end. A big, bulky but athletic freak, the tight end knows how to find the end zone and has been stellar at executing over the past two seasons. A second team All-American in 2019, Freiermuth is one of the key difference makers on this Nittany Lions offense. His rangy strides make him tough to bring down in space and his solid hands make him a quarterback’s best friend. Not afraid to get dirty in the blocking game Freiermuth can use his size to move people and wall off defenders. The presumptive Mackey Award favourite going into the season, Freiermuth is the most complete all-round tight end in this class. Another big season will seal his day one draft position. 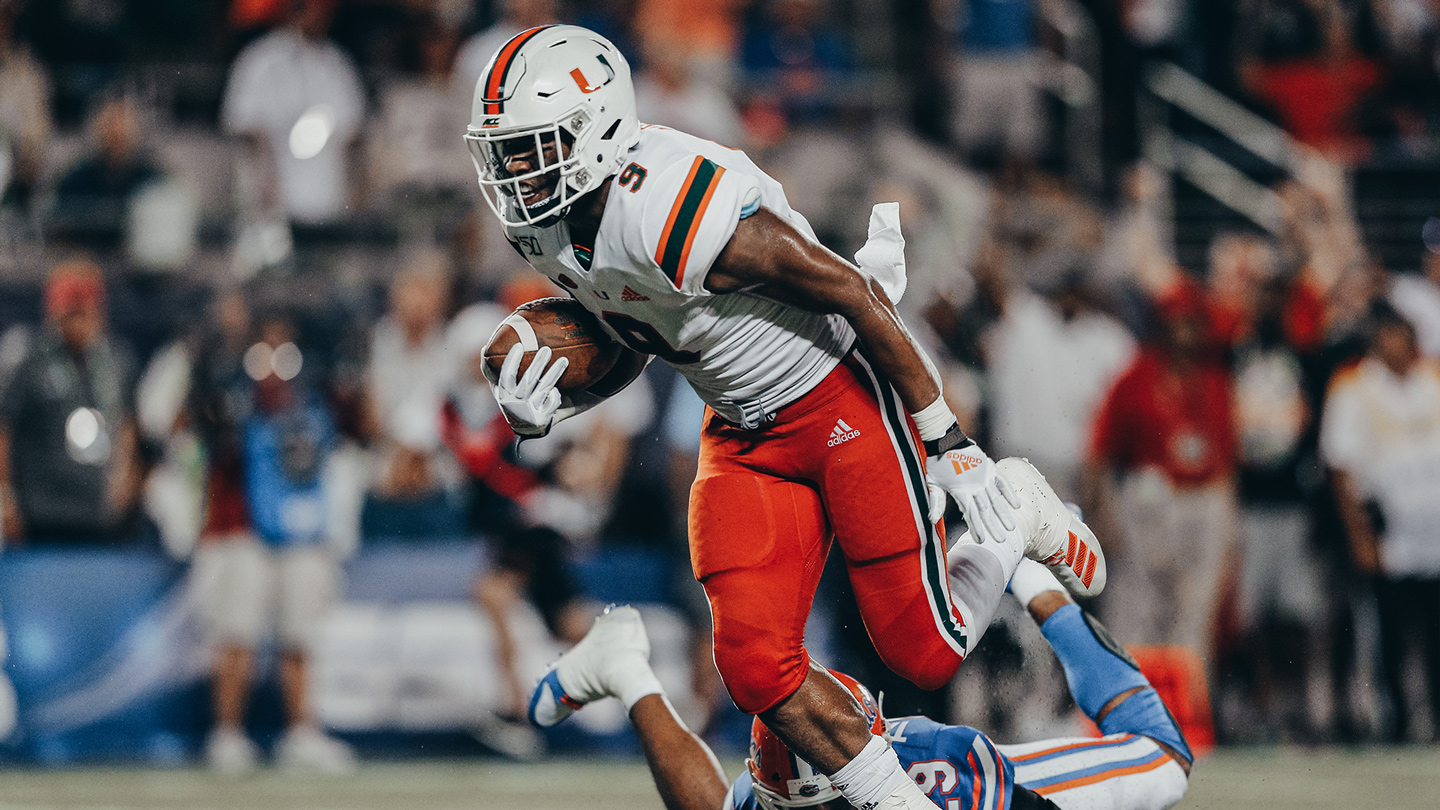 First team All-ACC in 2019 and a Mackey Award finalist, Brevin Jordan is a true receiving threat in the mould of former ‘Canes tight end Jimmy Graham. A future move tight end in the NFL, Jordan has excellent hands and interesting YAC ability. An above average blocker, Jordan puts in huge effort on every play which can sometimes make up for his unrefined technique. His lack of production in the endzone is something that needs to improve in 2020; with transfer quarterback D’Eriq King coming in from Houston Jordan’s stats should see an upturn this year. For King, having a do-it-all weapon like Jordan will be a huge help in his integration. 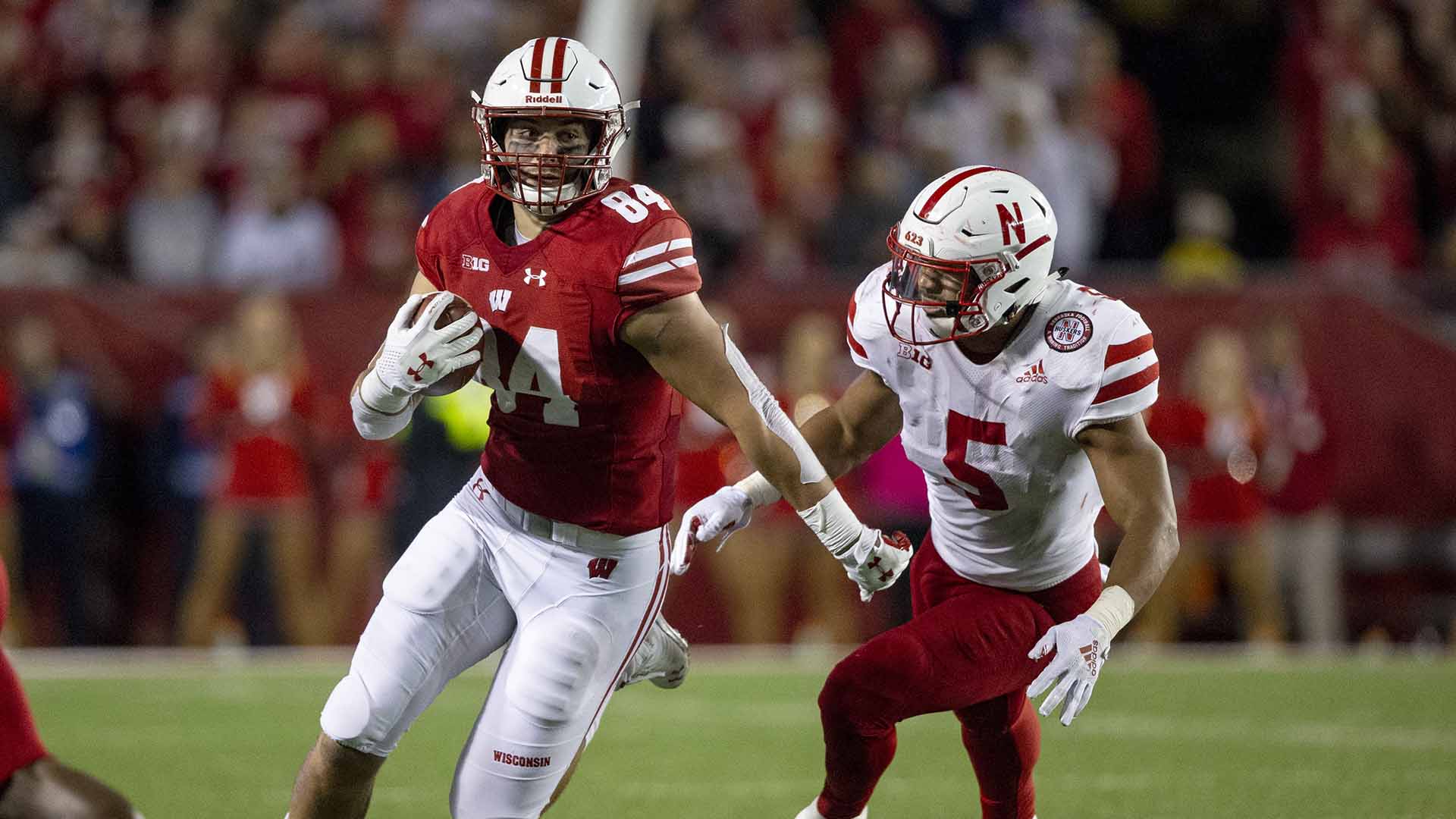 Another behemoth standing 6’5” and 250lbs, Ferguson is a prototypical inline tight end who is probably the best blocker in this class. He possesses great blocking technique, a strong frame and a quality motor that when combined put him in the top tier of blocking ability. A solid receiver who has 400+ yards with 12+ yards per reception in his first two seasons, Ferguson elected to return to school for his redshirt junior season and has the potential to blow the doors off college football this season. His quarterback at Wisconsin, Jack Coan will return with a year of experience in 2020 which should lead to fewer errors and more production for the weapons in this offense. Ferguson should benefit and could easily be ranked as the top tight end in this class by the end of the season. 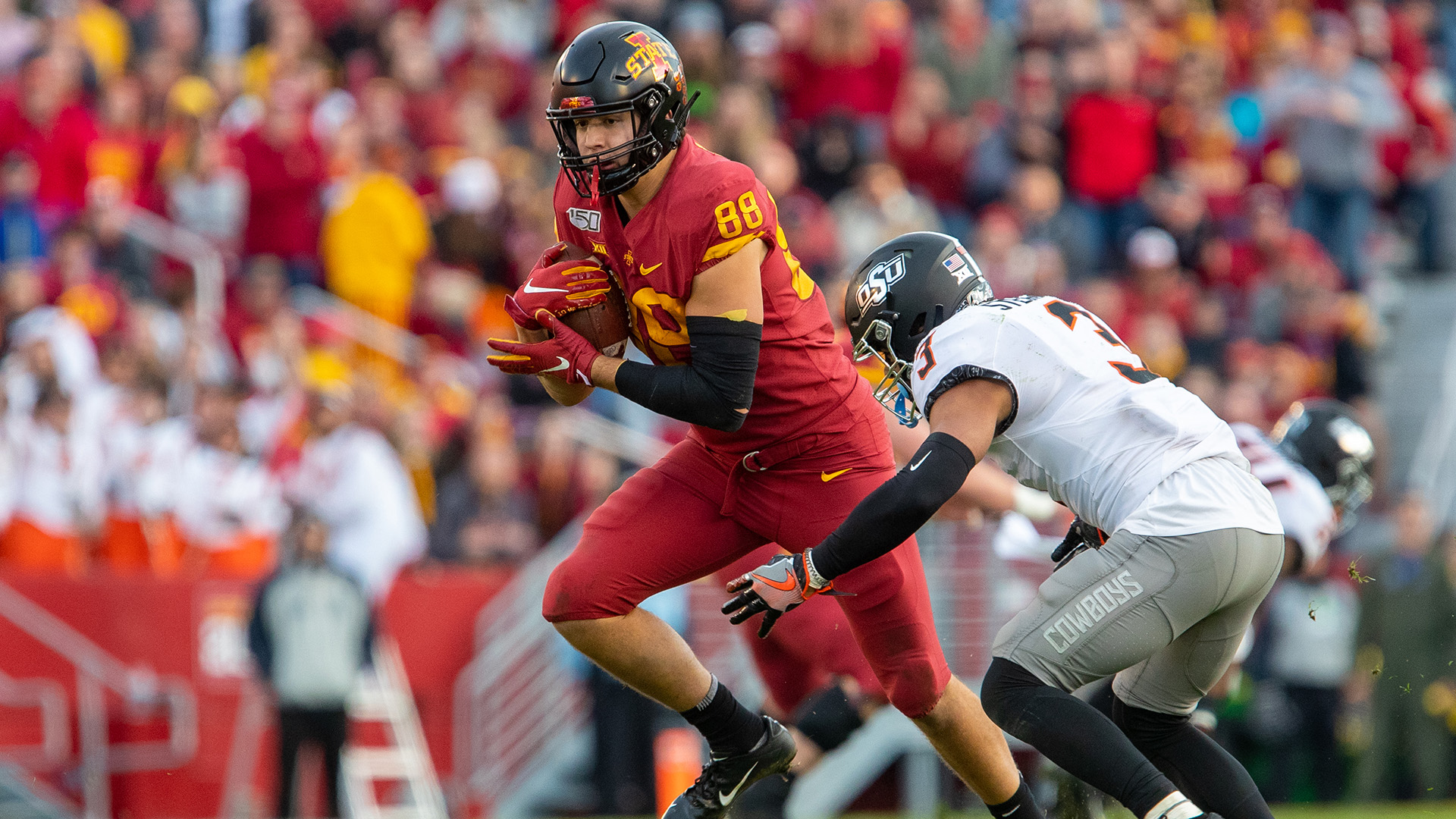 Coming back to school after one of the best tight end seasons in Iowa State history, Charlie Kolar put up close to 700 yards and 7 touchdowns on just 51 receptions in 2019. Great hands, a huge frame and perhaps the best route running ability at the position vaunt Kolar towards the players at the top of the position ahead of the 2020 season. Brock Purdy’s go to target on third and fourth down, Kolar is a huge safety blanket for the Cyclones. A rare combination of reliability and big play potential, Kolar is going to be one of the most exciting tight ends to watch in the open field in 2020. 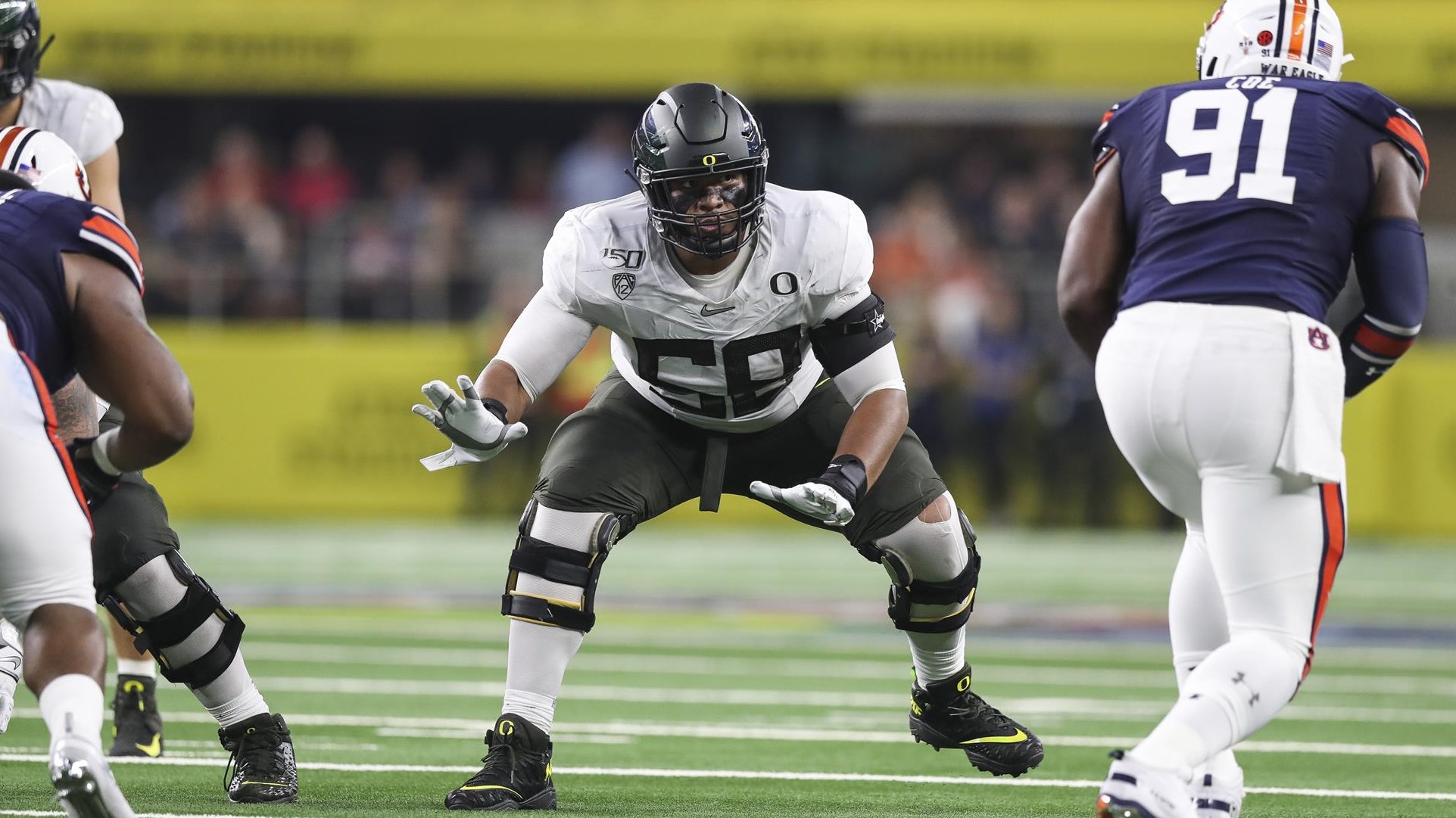 There isn’t another player in college football who plays their position as well as Penei Sewell. The Oregon left tackle is a monster on the line of scrimmage; insane functional strength allows Sewell to wall off pass rushers. In addition, Sewell’s brilliant footwork and athleticism make him as close to perfect as a tackle prospect can be at the college level. Sewell has no technical flaws in his game – the only point of scepticism is that his anchor strength has only been tested against Pac-12 defenders and Sewell may need to add some muscle to compete with the best the NFL has to offer. However, when you get him in to an NFL conditioning program that strength will improve immeasurably. 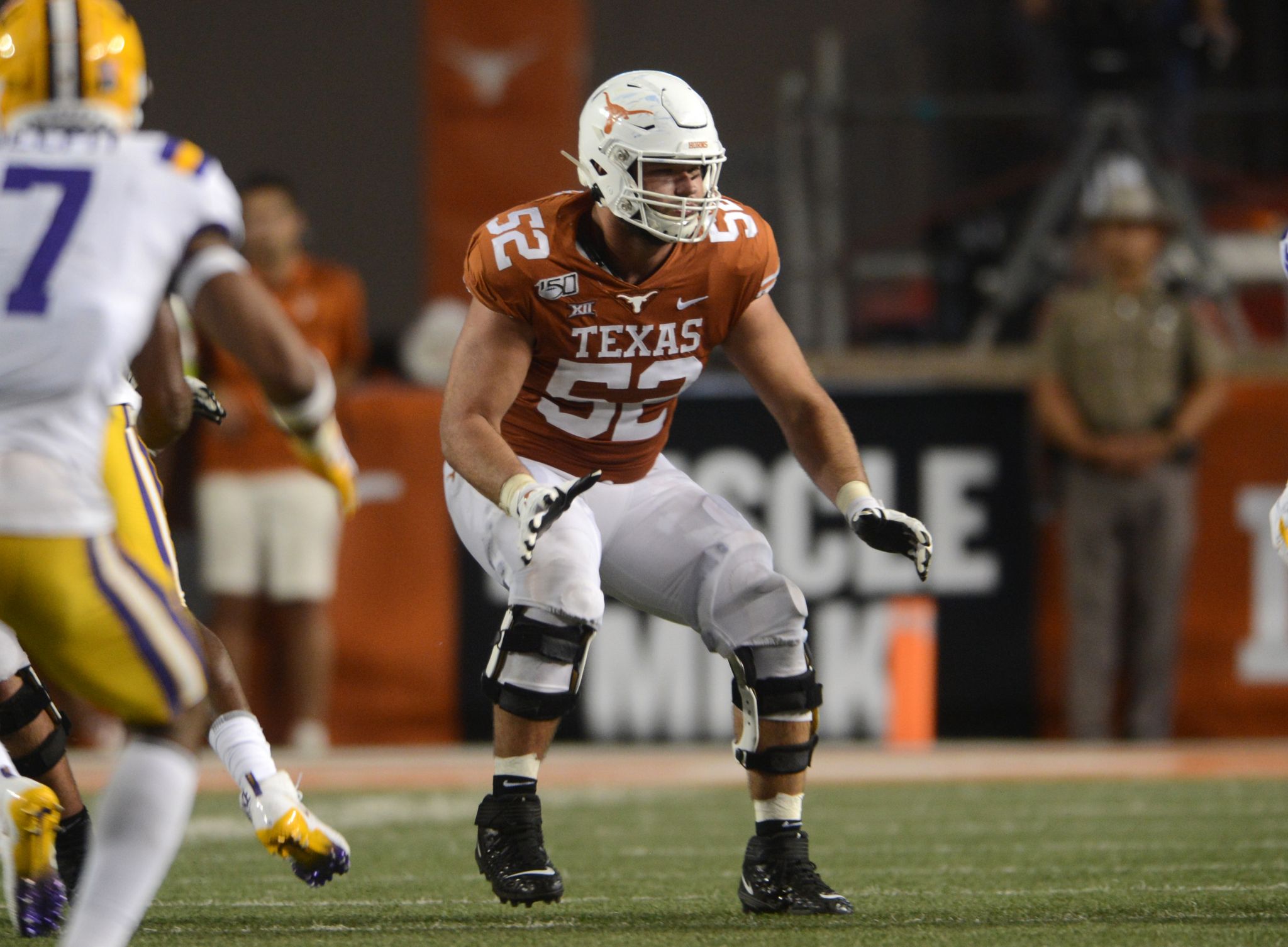 Another monster tackle prospect in a class that is developing in to one that can rival the 2020 class. Cosmi possesses clean and solid footwork that isn’t flawless, but is definitely a strength of his game. Sometimes his footwork can be a problem against quality speed rushers but most of the time he is able to recover and stop the sack. Precise hand positioning allows him to guide defenders away from the point of attack. A solid, strong run blocker, Cosmi has a mean streak that allows him to dominate defenders and clear huge lanes for his running back. 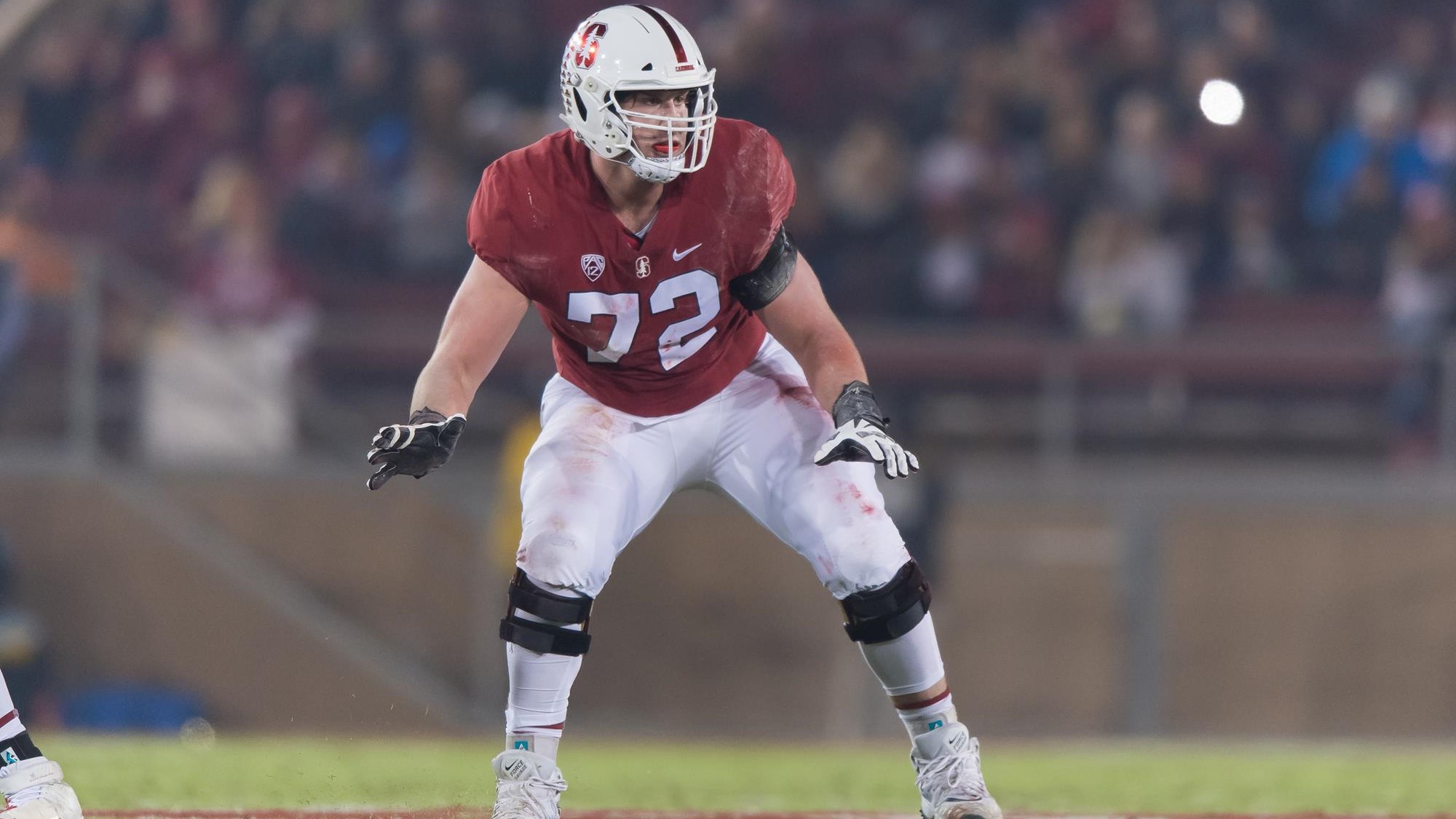 A big hoss of a tackle, Walker Little dominates defenders with his elite functional strength. He’s able to utilise that strength in leverage situations to pancake defenders in both pass and run sets. Little is an old school people mover who dominates in power run and short yardage throws – his fit in a scheme that gets the ball out quickly will be the making of him at the next level. He does have some inconsistencies in his hand placement,especiallly when he comes up against players at the next level. The weakness in hand usage can lead to Little overcommitting himself to try and make up for his less than desirable length. Little may kick inside at the next level but is sure to produce some highlight worthy plays during the 2020 season. 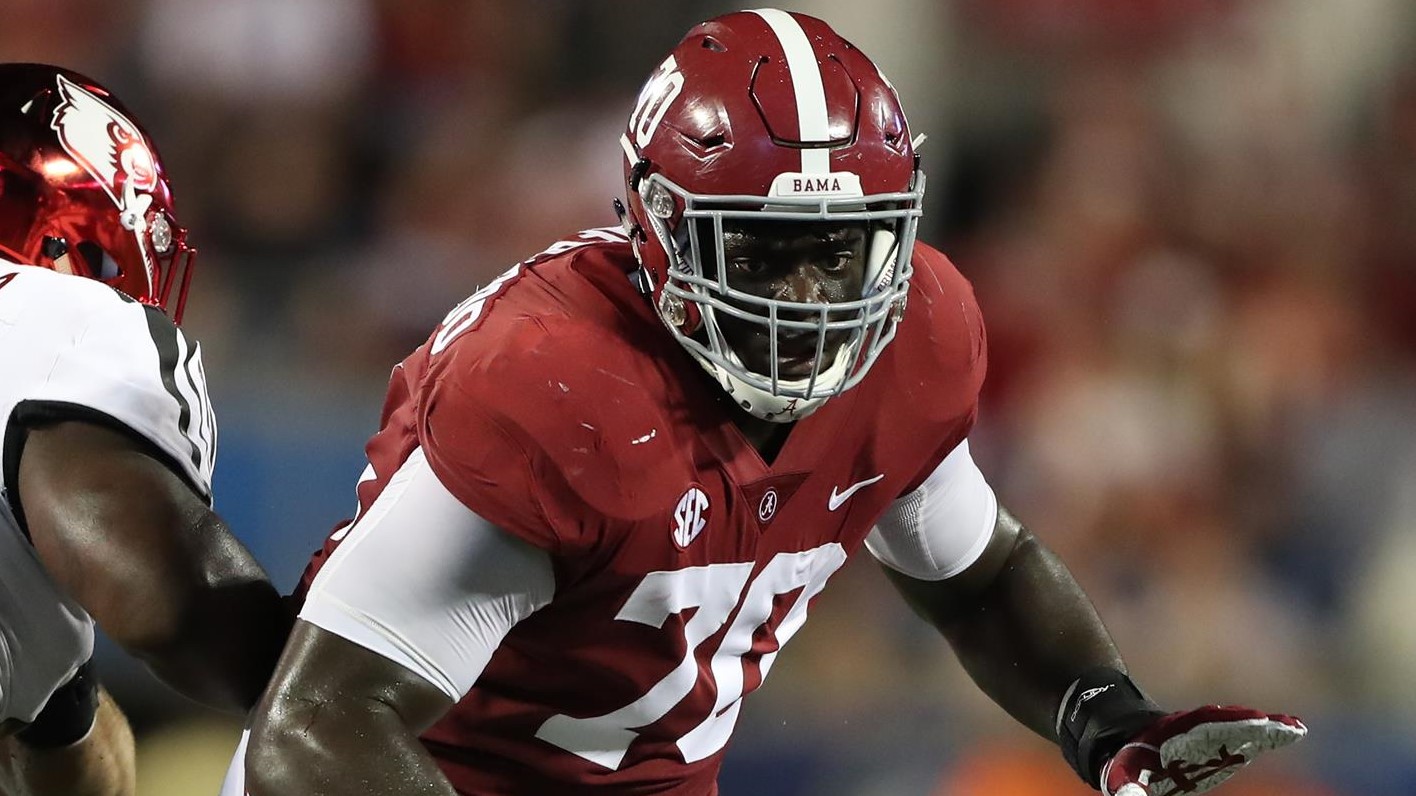 An aggressive, sturdy tackle, Leatherwood possesses a springy pass set which helps him drive defenders away from his quarterback. In the run game he is a force when he can build momentum, which can lead to some pretty blocks and big holes for his backs to run through. With Alabama likely to revert to a more run heavy game plan in 2020 we are sure to see some of Leatherwood’s awesome run blocks over the course of the season. Sometimes his over-aggression can lead to a lack of body control, which in turn allows defenders to wait him out and beat him when he’s off balance. This leads to a weakness against rushers with an accomplished arsenal of pass rush moves. The potential for Leatherwood is huge, he just needs to clean up a few bits of his game to be elite in 2020. 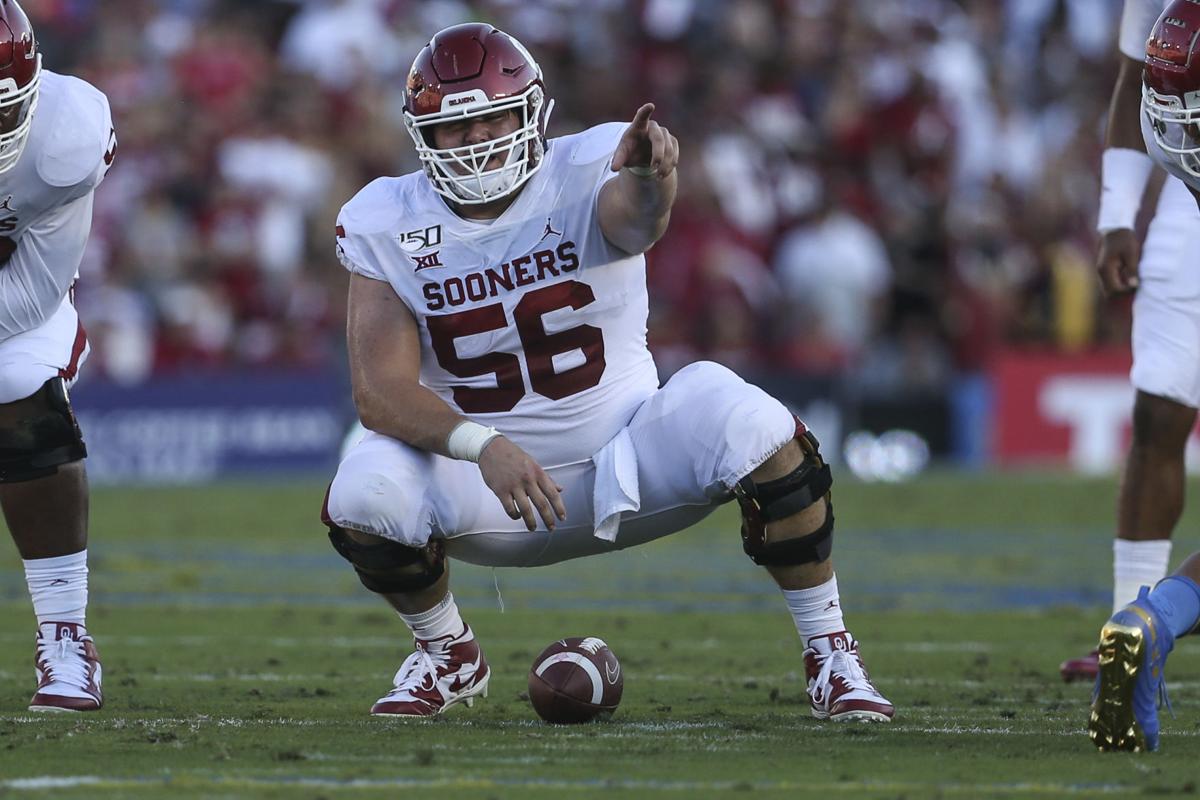 A leader with elite football IQ and elite talent on the interior, Creed Humphrey deals well with big nose tackles with his elite blocking angles. He has elite lower body strength and footwork which allows him to be at home in any scheme. Patient in his approach, Humphrey is cautious not to lose balance by getting overly physical. A solid anchor makes him tough to move off the spot which helps to preserve the pocket. The fact Creed is left-handed could be an issue with playing centre at the next level; it requires an adjustment that could pose a challenge. Humphrey can also be caught leaning post snap which can lead to some struggles against interior defenders with elite get off.

the head of seven step drop, the touchdowns analytics page. alex is a Texas longhorns and green bay packers fan. he is one of the college chaps trio and produces the touchdown nfl podcast!

END_OF_DOCUMENT_TOKEN_TO_BE_REPLACED
Get 20% off PFF ELITE and prepare to win in 2019!