2020 Defensive Rookie of the Year Candidates

2020 Defensive Rookie of the Year Candidates

Unlike its league-wide equivalent, the Defensive Player of the Year, The DROY award is much more straightforward in its “criteria”. Over the last 20 years, almost every single DROY since 2020 was drafted in Round 1, with the exceptions of Darius Leonard (36th overall in 2018), Demeco Ryans (33rd overall in 2006) and Kendrell Bell (39th overall in 2001), it narrows the list of potential candidates considerably. This is due to a combination of factors.

Firstly, as high draft picks, teams want to get as much value from them as possible, and they therefore see more playing time in their rookie seasons. Secondly, with fewer scheme complications on defence than on offense, college players can also transition more easily. Thirdly, the reason the players are drafted so highly in the first place is because they showed potential in college, and are perceived to be capable of succeeding in the NFL.

However, unlike the DPOY Award, the statistical production is a little less informative. The DPOY tends to favour forced fumbles and interceptions first, then sacks and tackles. The DROY, on the other hand, is a little more balanced. There have been a high number of LBs who won the award since 2020 (12 including edge rushers with a LB designation), most of whom made their impact with tackles, rather than sacks, intercepts or forced fumbles. As a baseline, the different positions typically need the following statistical output in their rookie season to win (or be in the running for) the award: 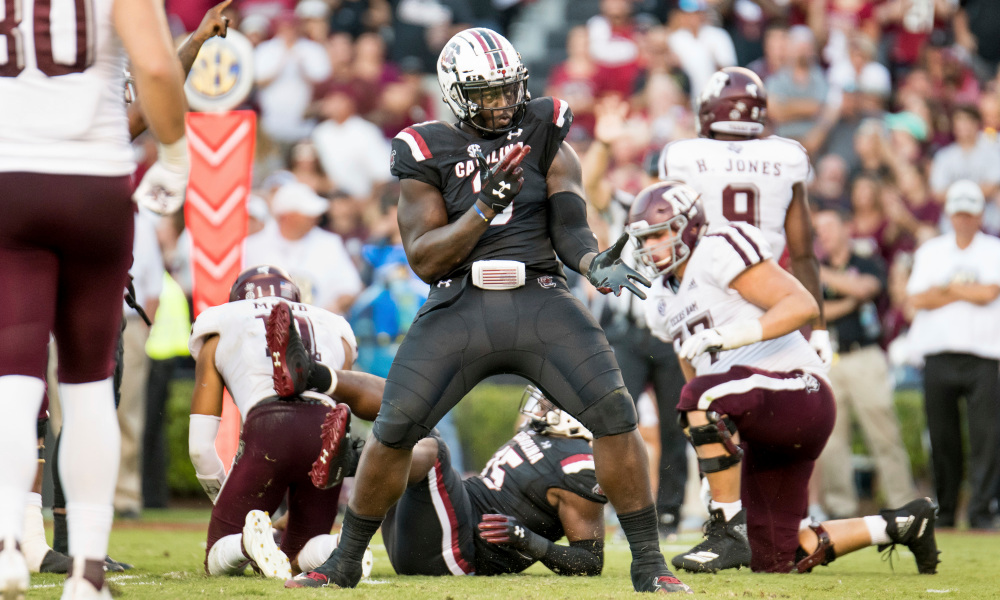 With just two winners of the award playing CB (none at Safety) since 2000, there is less evidence to draw upon. In 2017 Marshon Lattimore posted stats of 5INT/18pass deflections/1TD, and in 2015 Marcus Peters had 8INT/26pd/1ff/2TD. Both were among the top five in the league in INTs (Peters was tied first).

Frequently supporting this is the player attaining a Pro Bowl or All-Pro selection, as well as a singular week where the player garnered a high level of attention with their production e.g. multiple sacks. The player doesn’t necessarily have to start all 16 games, but they essentially need to play in all 16, usually starting most.

What this allows us to see is a limited number of names of players who could win the 2020 DROY. With Safeties not winning the award for the last decade, and none taken in the first round, it would be unprecedented for one to win this season. Additionally, no players outside of the first two rounds have been included, as this would also be against the trend. With the majority of DROY winners since 2020 also being a LB/Edge rusher, fewer CBs or DL have been given consideration. Here are the players we believe to be in the top 10 when it comes to their chances of winning the DROY in 2020.

Playing within one of the NFL’s fiercest defensive fronts, there is a chance Kinlaw gets lost among the other playmakers on the 49ers. But this can also be an advantage, as it will create opportunities for Kinlaw as opposing teams focus on the more known names.

DeForest Buckner, who Kinlaw is essentially replacing, had just 7.5 sacks in 2019, and with around this number and a few forced fumbles, it puts him in a strong position to gain attention as the kind of player who sets up opportunities for those around him.

While playing the interior DL is also a challenge for a potential DROY, Kinlaw’s ability to penetrate the pocket gives him the chance to record the sack and forced fumble numbers he will need to win the award.

Although it’s a bit harder for CBs to win the DROY, Okudah will get chances to make plays. If one of the pass rushers doesn’t step up, and Okudah can make several interceptions, he will enter the discussion for the award. Despite having just 3 interceptions in his college career, all came last season, and Okudah could succeed by having a low completion percentage on passes against him.

As the CB1 for the Lions, he should get early chances to prove himself as opposing QBs test him out against the league’s best receivers, including Adam Thielen, Davante Adams within the division, as well as Michael Thomas and Julio Jones in the first several weeks of the season.

The slight unknown surrounding the Panthers in 2020 makes it an uphill battle for Gross-Matos, as by the time the team finds its identity, other names will likely have emerged for the DROY award. Gross-Matos managed just 8.5 sacks in 2019 and had no forced fumbles, but has a few other players around him that will be the focus of opponents. With Brian Burns coming off the other edge, Gross-Matos could be moved around to get a more favourable matchup.

Should he notch six or more sacks, or help with rectifying the Panthers’ poor turnover margin (-14) from last season, he’ll be in with a chance at DROY in a weaker pass-rushing class. 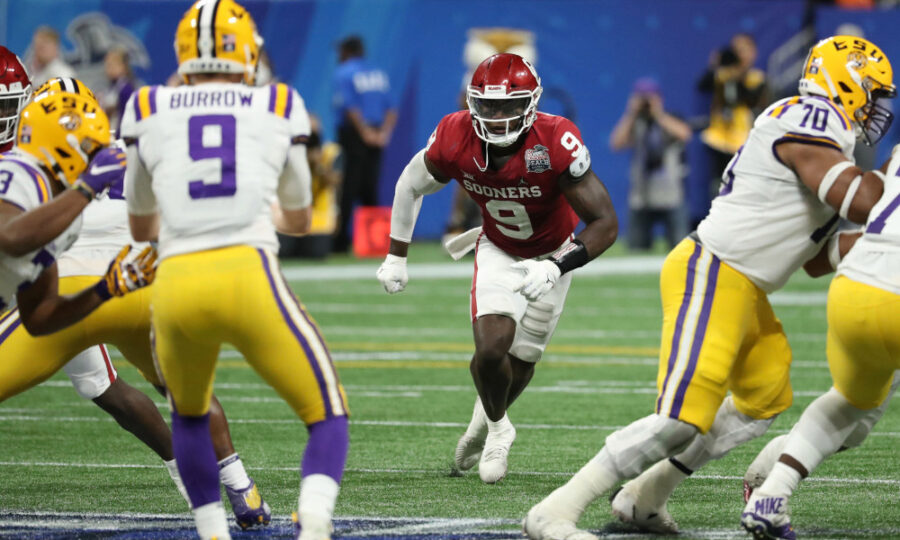 While he should see a high level of playing time from Day 1, Murray has a lot of players around him who will take attention off him, including Joey Bosa, Melvin Ingram, Chris Harris Jr, Casey Hayward and Derwin James. While his pass coverage isn’t his best asset, Murray will make his name helping to shut down the run on a Chargers team that allowed a league average 4.2 yards per rush and 1805 rushing yards.

That said, the Chargers were the worst in the league in pass completion percentage allowed last year with 70.7%, and this gives Murray chances to add interception numbers to his stats. Plus, with the return of James from injury and addition of Harris Jr, the team should have an improved pass defense. Murray will instead need to establish himself as one of the team’s top tacklers, and potentially the defensive playcaller, if he is to have a chance at the DROY.

Chaisson’s role in Jacksonville is going to be multi-faceted, although a large portion will be rushing the passer. Fellow Edge rushers Josh Allen and Yannick Ngakoue will lead the pass rush once again, after they had a combined 18.5 sacks and 6 forced fumbles between them, although the departure of Calais Campbell sees 6.5 sacks and 2forced fumbles leave with him.

Yet despite being a top 10 team in terms of sacks, in 2019 the Jaguars were average or worse in passing yards allowed, completion percentage and yards per attempt. Chaisson could be asked to drop into coverage a little, or add extra pressure to give opposing QBs less time to throw. However, Chaisson will also need to be used against the run, as Jacksonville were bottom five in yards allowed and yards per attempt. Between all of this, it will be hard for him to rack up sack numbers, but with chances at interceptions as well he could get the turnovers to make a name for himself.

Playing ILB for the Ravens is a position of prestige given the history of who has played there, and Queen enters the role of what was Baltimore’s biggest weakness in defense prior to the 2019 season. Queen will mostly be shoring up the middle for the Ravens, and should get high tackle numbers in that role. CJ Mosley averaged over 110 tackles each year in his five seasons with the Ravens, as did Ray Lewis before him.

If Queen can improve in coverage and continue to attack the run as he did at LSU, he could have a big impact on a team that is vying for the AFC Championship, and hence gain plenty of attention for the DROY award.

After falling to the second round, the Patriots added another pass rusher to emerge after Kyle Van Noy and Danny Shelton left earlier this year, and Uche could be the guy. The Patriots were a top 10 team in 2019 in terms of total sacks (47), yet their highest individual total was Jamie Collins with 7 sacks.

Last year, Uche managed 8.5 sacks and 2 forced fumbles, which suggests he can be a contributor early on in his career if he can consistently make these type of plays. While he may not be used purely as a pass rusher, and often tasked with stopping the run, Uche benefits from playing in a scheme that will put him in position to make the most of his skills.

With Patriots’ Defensive leader Dont’a Hightower also opting out for the season, Uche could be utilised against the run more than originally intended, but regardless there are starter roles for him to step into on the defense. He will need to get at least one forced fumble to be a contender, but in New England’s system should be given opportunities to fill the void, while having enough productive players around him to take the pressure off him.

One of the criticisms of Brown coming out of college was his lack of statistical production. Yet where he was praised was his motor and ability to keep up the same energy late in games. This gives Brown the opportunity to play plenty of snaps and notch high tackle numbers, especially defending the run as opponents are looking to close out games.

If he can manage a few sacks, or more importantly multiple forced fumbles, Brown can be a consistent presence all season that quietly amasses the stats where it counts. He isn’t in an ideal situation, as the Panthers offense appears to lack the firepower to keep up with opponents, but if Brown becomes a leader and keeps his team in games, he has a ready made narrative and will generate the stats to back it up.

With his versatility allowing Simmons to be moved around the field, he will have plenty of chances to get sacks and interceptions. Simmons saw time at LB, Edge and Safety/DB in college. If the Cardinals can use his dynamic skillset to similar effect, he will quickly establish himself as a playmaker. Yet this could also work against him, as he may not manage enough production in any singular category to stand above a pure pass rusher who manages to attain double-digit sacks.

There’s plenty of upside to Simmons’ game, and he’ll have his work cut out for him, as the Cardinals were one of the worst teams against the pass in all categories, and also a bottom 10 team against the run. Flashy plays from Simmons, especially turnovers, could propel him into the spotlight early. After Arizona QB Kyler Murray won the OROY in 2019, Simmons would become part of a narrative surrounding the team that boasts plenty of young talent.

As the second overall pick, Young was highly regarded for his talent to get to the QB, leading the college ranks in sacks last year. With comparisons to former DROY winners Nick Bosa and Joey Bosa, Young joins a formidable Defensive Line in Washington. If the players alongside him give him one-on-one matchups, Young could become an impressive force early on in his career. With 10 sacks and a forced fumble, Young would be hard-pressed to not win the 2020 DROY.

Washington were 10th in the league in terms of sacks in 2019, but allowed the second most rush yards. While Young was selected for his pass rush abilities, the team needs to do better against the run, and this could impact his role. If Young can crack the starting lineup, he joins a pass rush group that can bring pressure from multiple points, allowing him to play his natural game, facing fewer double teams than he did in college. Young is the clear-cut favourite to win the award, but only if he can emerge from the shadows of his teammates.

END_OF_DOCUMENT_TOKEN_TO_BE_REPLACED
Get 20% off PFF ELITE and prepare to win in 2019!